Tiffany Yeung : I do what I can however insignificant I am

“Hong Kong is under the weather.  I have never joined a mass rally before and I took to the streets four times within a matter of weeks recently so as show my support to the city.  People carry on with life fulfilling their obligations and responsibilities in different ways.  I do what I can and what I think is right.  I have respect for people who choose to stay away and for those who take an active stance.  Change puts resilience to the test.  This is why most people resist change.  Fortunately, people are becoming more aware, stand by their conscience, do their best and soldier on.” 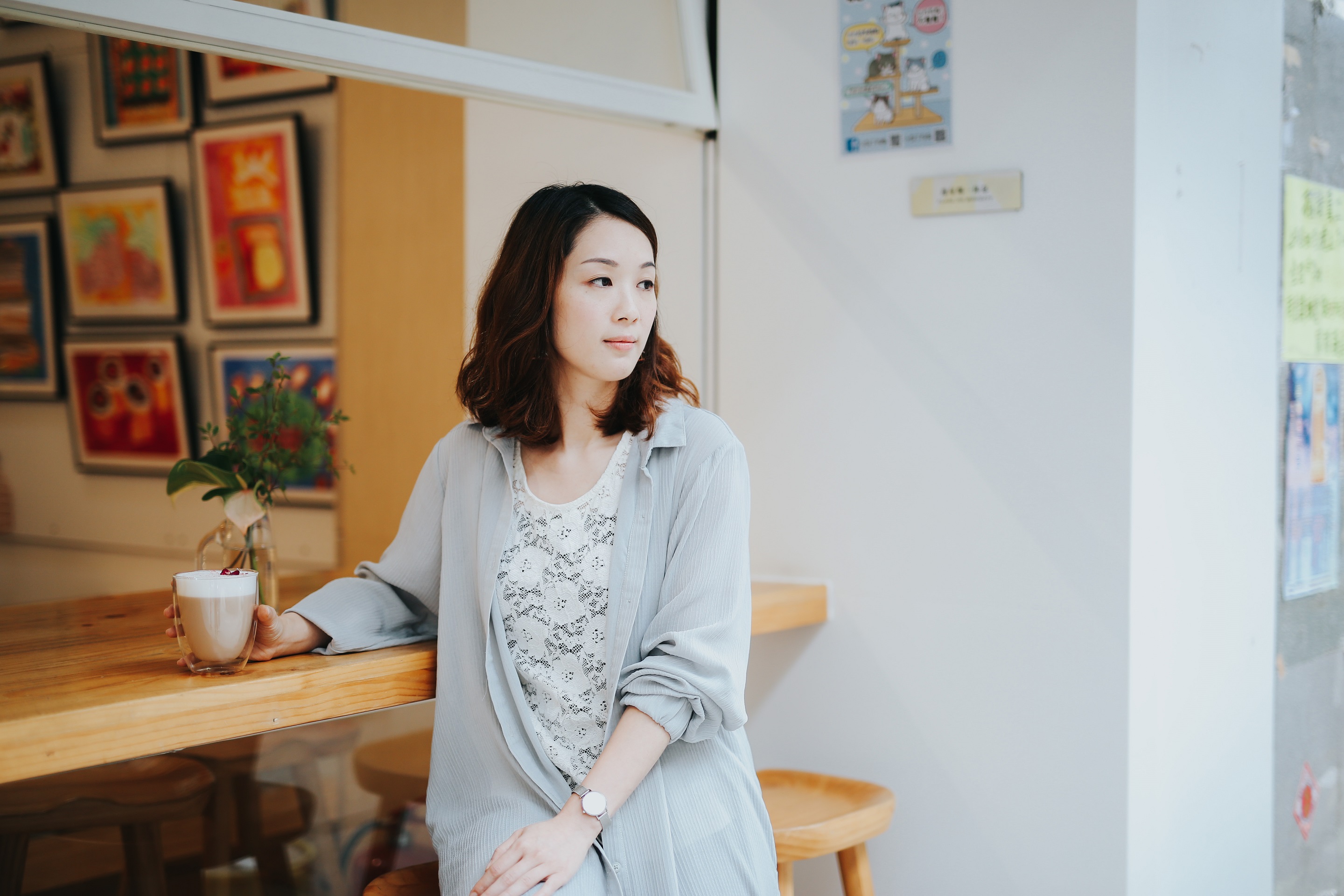 Before 2017, Tiffany had not a care in the world. Born to a well-off family, she was a high achiever in both moral and academic development at school. An overseas education followed, and she returned home in Hong Kong for a well-paid job and subsequently formed a family of her own. If anything, she can be described as a “posh” girl.

“I spent eight years with a private bank and rose through the ranks to become an AVP. My boss and colleagues were nice and the pay was good but I started to get wearied after the fifth, sixth year. I could use a change of pace but I just lacked the push factor.”  During those years, Tiffany spent her holidays abroad just like any average Hongkonger.

“I was in Canada once and a trip to Niagara Falls made me feel insignificant and want to leave my job for something different.” She confided in her husband and he said: “Give it a go. We have nothing to lose.”  Then, she quit her job and focused her mind on planning for a tea room. “When I was studying in the UK, I worked part-time waiting tables. I enjoyed the tea-break culture where people savour a cup of tea and a piece of pastry.  When I came back to Hong Kong, I would have a cup of tea in the office.”

She even enrolled herself in a tea sommelier programme to hone her tea appreciation skills. “Hong Kong people like their Hong Kong-style milk tea, bubble tea or having tea in a Chinese restaurant.” She thought that coffee shops have become so popular nowadays she might as well try promoting the tea culture and open a tea room.

At the end of 2017, she rented a retail space in Shun Ning Road for Tea Hub. The shop, which has a white decor scheme, exudes a cozy minimalist ambiance favoured by today’s hipsters. The Tea Hub menu offers savoury dishes such as Ochazuke alongside sweet choices like Hojicha chiffon cake and beverages like Roselle soda. 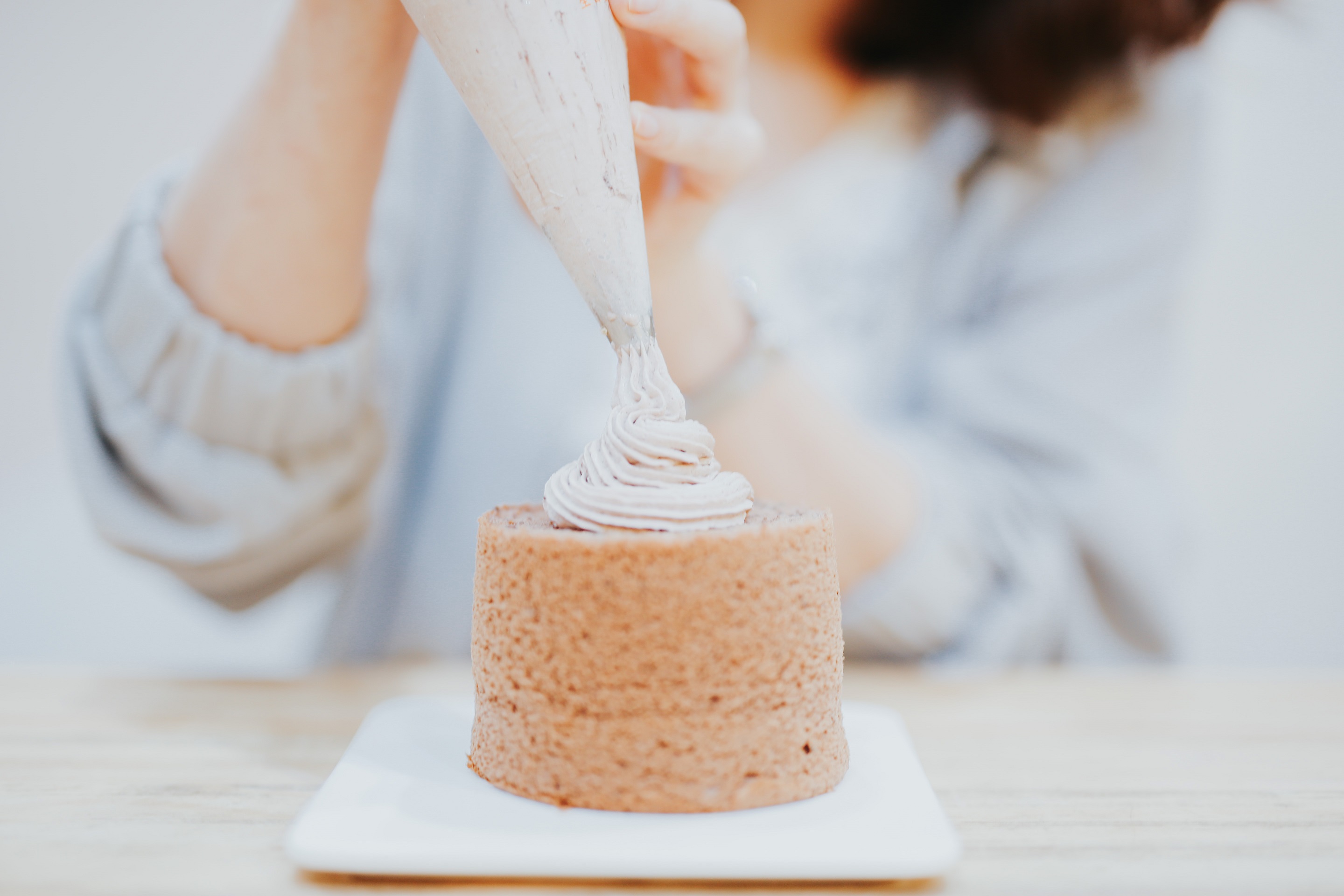 “I wish to get people know more about this community”

Located among time-honoured shops in Shun Ning Road close to Po On Road Market, Tea Hub is an exciting newcomer. “My husband grew up in the neighbourhood. Over the course of our decade-long relationship before marriage, we met here often because of the agreeable old-town atmosphere. We used to hang out in Chinese tea houses in So Uk.  We even took wedding photos in Shun Ning Road.” She noted that old shops peppered across the entire stretch of Cheung Sha Wan. You will find an old-school record shop here and an alleyway barbershop there. It may sound like a complicated neighbourhood but it is at the same time evolving on its uniqueness of having the best of both the old and new.

Opening Tea Hub was a dream come true but it was just the beginning. Tiffany used to be a well-pampered OL (office lady) who never set foot in catering. “The going was tough during the first six months. I had to have my finger in every pie.” She alone had to take care of everything from staffing to menu engineering, promotion and social media posting. She dared not even think of taking a day off.

When things including manpower and business started to fall into place, she rekindled her aspiration. “I have always enjoyed a bit of arts and culture. I like going to exhibitions and visiting craft markets.” She has reserved a space at Tea Hub for a projector and an empty wall for exhibits. It was time to turn ideas into reality – a community exhibition.  “Not all artists have the opportunity to showcase their works. It would be a happy occasion. I want to hold exhibitions that make people happy.” With Tea Hub up and running, she did not need to worry about renting a venue. “It is very personal and over years I have come to know quite a lot of people who may have news ideas to contribute.” 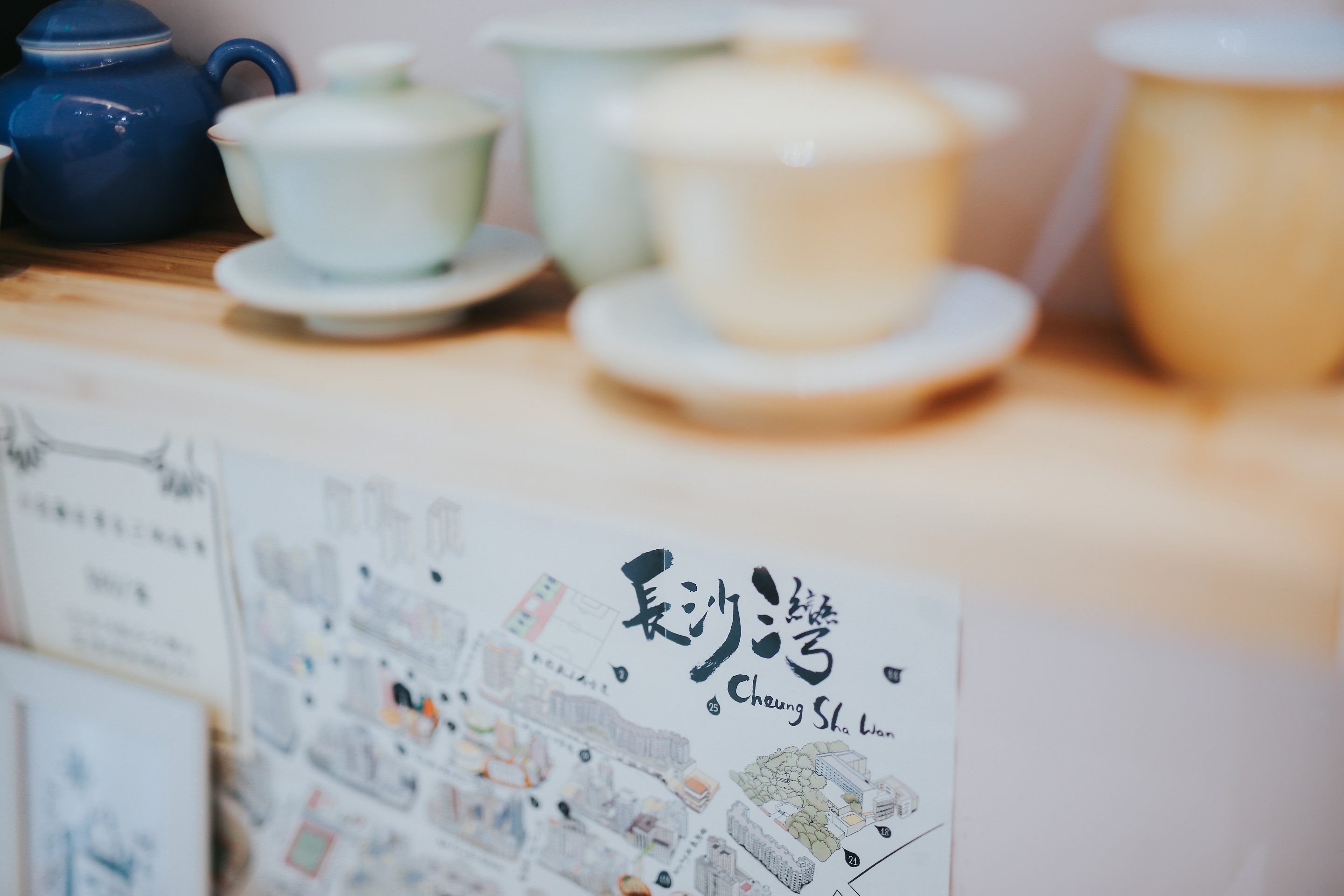 “I never thought of changing the community”

In June 2018, Tea Hub finally held its first exhibition showcasing the faces of various old shops in the neighbourhood. “Our first tour also took place,” she noted. A novice in event management, Tiffany did her research and visited shop owners before the tour. “All these had to be done before the shop opened for business. I also needed to juggle business and research. It took me quite a few weeks.” The task was demanding but it allowed her to discover the soul of the community – the old shops.

Organising community cultural tours may not seem such a big deal. “I never thought of changing the community. Rather, I would like more people to get acquainted with the community, get happy and have fun. That is already good enough.”

Not a shy person, she visited old shops in the neighbourhood and strike up a chat with the shop owners before planning for a tour. “Chow Kee Sauces, for instance, survives only on sauce retailing. To me, that sounds unbelievable.”

On her first visit, the shop owner dismissed her by simply saying: “There is nothing to see here.” She recalled: “We only looked at the shop from across the street and explained the shop’s history during our first tour.”  Then, a relationship with the shop owner grew.  “The shop owner even arranged a tasting for the participants for our third tour.” 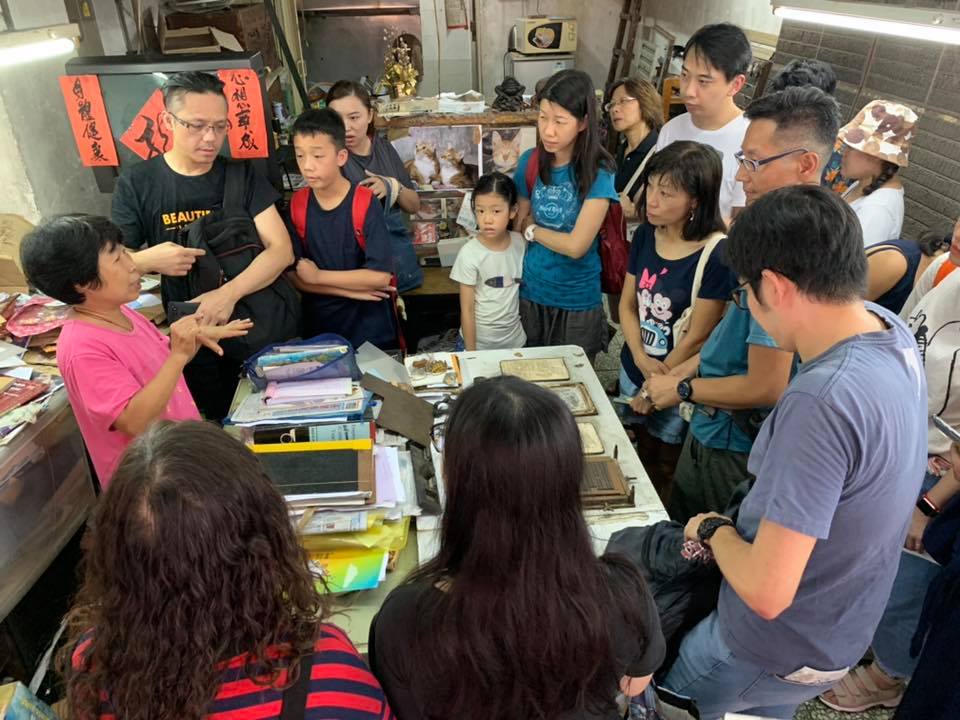 “This has led me to realise just how insignificant I am.”

Keeping the business afloat can be rather laborious. Like many small shop owners, Tiffany is facing operational challenges on a daily basis. These have included keep the manpower up and navigating the business ebb ad flow. For instance: “Chiffon cake is all the rage nowadays. So much so that we have spent almost every day fulfilling orders.”  Cake snaps on social platforms catch people’s eyes, she quipped. “But, tea should remain the key theme. Tea appreciation workshops are regular features on Tea Hub’s agenda.”

The interview with Tiffany took place on 2 July.  In a short span of just two months, Hong Kong people have experienced overwhelming instances. “Recently I met a couple of conservationists who have been making a great deal of effort on the preservation of a Grade II historic building in Castle Peak Road.  This has led me to realise just how insignificant I am.” 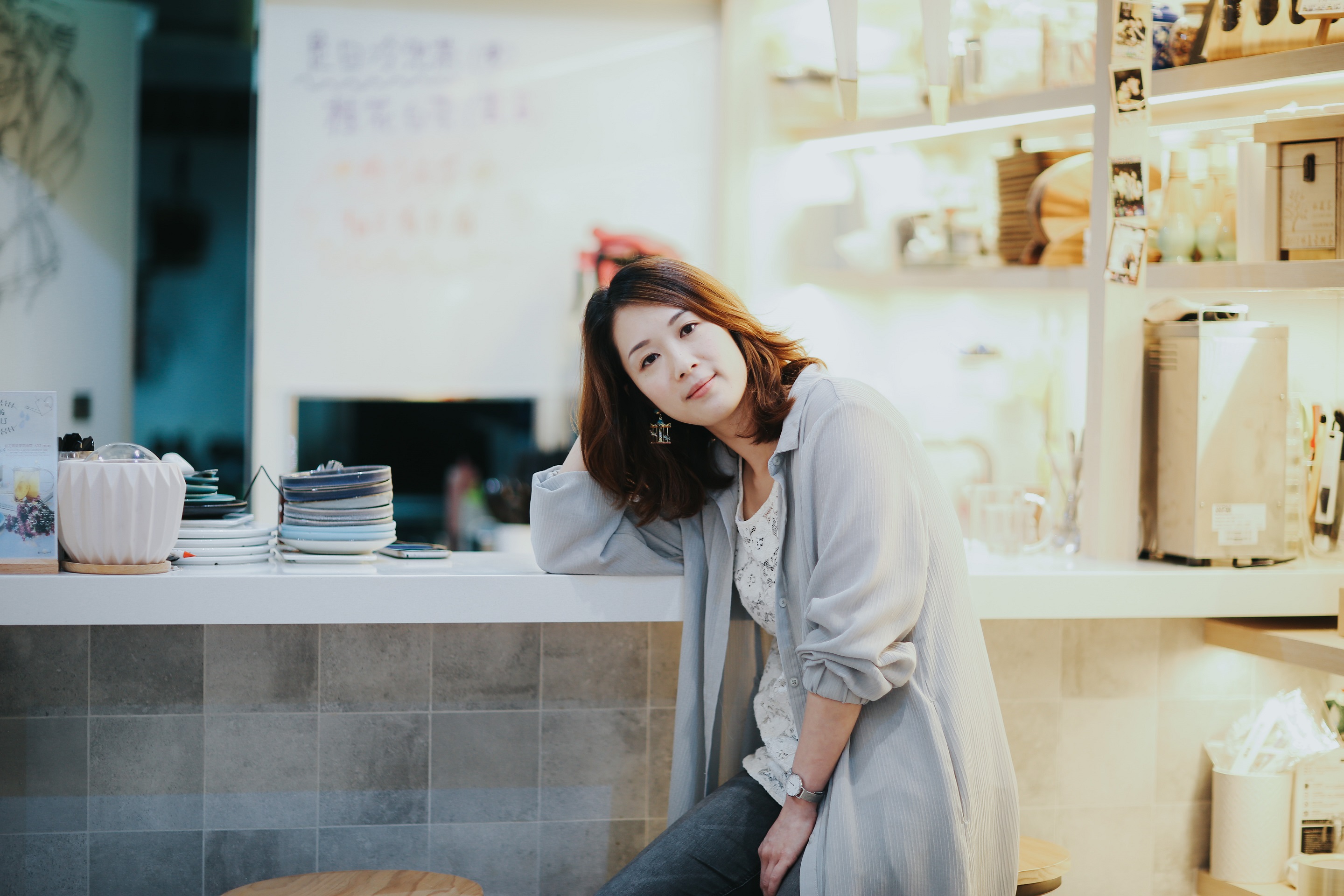 Tomorrow is full of unknowns. And yet, like many Hongkongers, Tiffany is doing her best.