Handpan musician Chor Lai : I am becoming who I want to be

Chor Lai quitted his full-time job for a career as a handpan player, is anything but inspiring. You can google thousands of stories with the headline like “A man/woman at his/her 30s quitting high-paying job for a dream”. His on-going journey gives him deeper insights and hopefully, it’s more than a dream-chasing story. 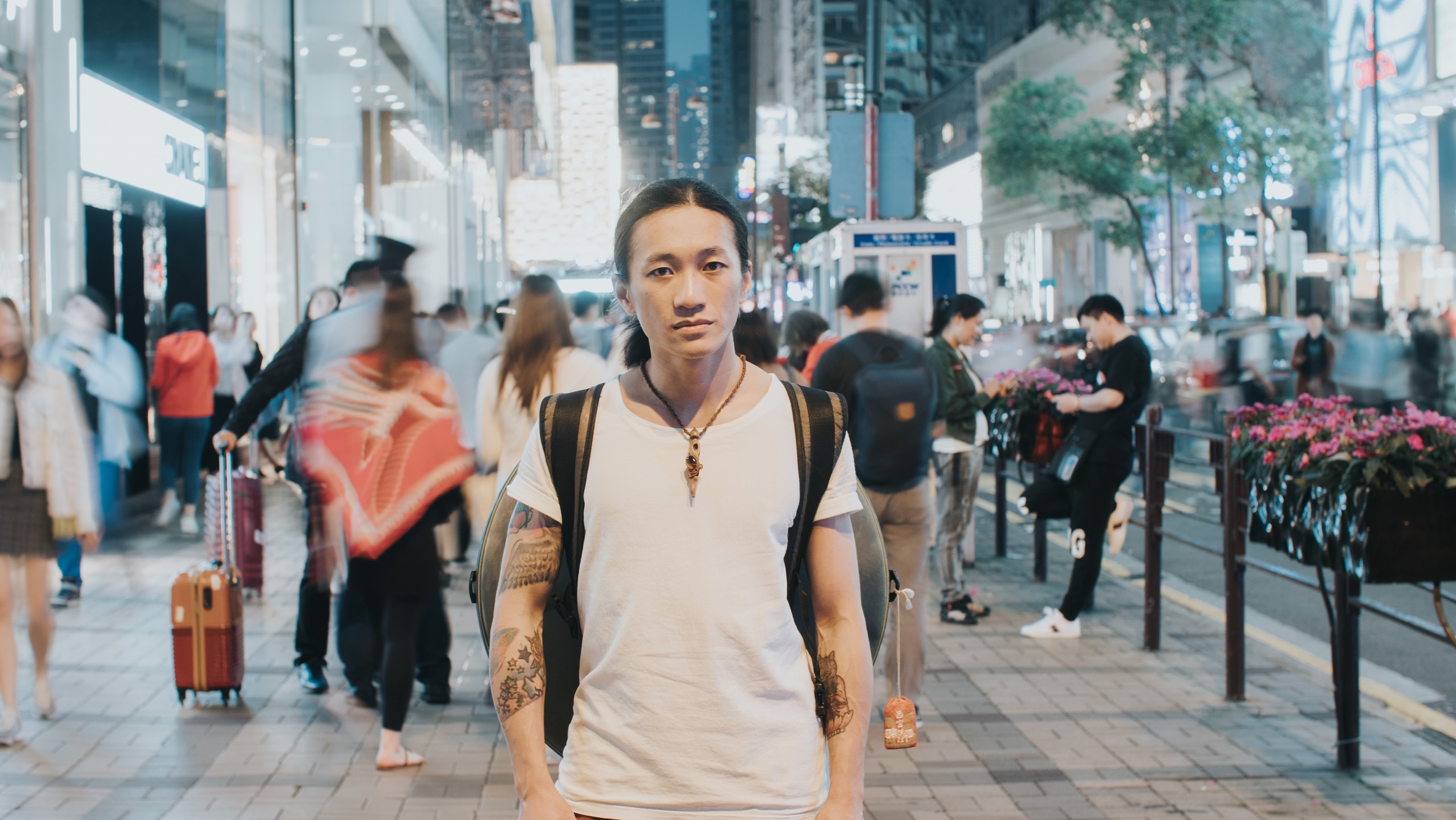 Would Chor’s story inspire you?

I knew the handpan musician Chor Lai for the first time from a promotion trailer for one of his live performances. His fingers danced on the musical instrument with such ease that it was poetry with words.

In his live performance, his two hands produced different and rather complicated awe-inspiring rhythms, sending emotions across the audience.  Without the security and guidance of a set of score sheets, Lai relies solely and naturally on his own memories.  People who practise music can surely visualise the hard work in each and every note he produces.

Later, in the meet-the-director session at the screening of documentary I’ve Got the Blues, he gave a live performance of an extract of the soundtrack.

Then, at the End of Life Cate Exhibition “感覺有時”, he provided the musical backdrop for two dancers in an opening act.  That stunningly captivating performance inspired thoughts as the music danced.

His recent Facebook posts reveal that he has been sharing the stage with other handpan players in various overseas gigs. 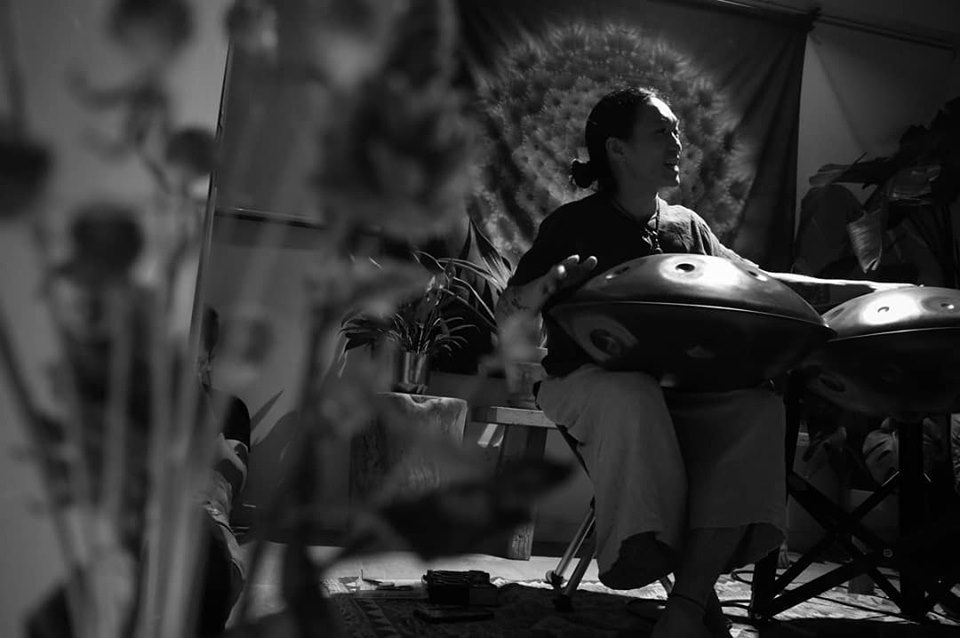 On his way to handpan

Artistic training enriches a person’s emotional quality by exerting subtle influences.
Last year saw Chor’s temperament change. It seems that he has found his tone of voice at last.

The musician has said that nothing lasts forever.  In time, rocks can crumble into dust. Some seven years ago, Chor was a sales and marketing manager in logistics. He would describe himself as a moaning drifter along a typical Hong Kong daily routine, keeping his head down at work for a monthly pay and totally oblivious of the world.

To escape the humdrum of everyday life, he logged on to Youtube one day and fell under the magical spell of the handpan.  It was fate, perhaps. That turned out to a life changing moment.

Today, he calls this UFO-lookalike, wok-shaped musical instrument as “water”. With a tap on one side of the “wok” and another on the other side, he explained, “It’s like a pebble cutting through water, causing an skirt of ripples.”  That image cannot be more vivid.

He admitted that he picked up the handpan because he initially felt that it looked “cool” but his dance with this instrument brought him closer to himself every day over the last four years.

“Art is a vehicle for self-expression.  On my way to the handpan, I got better acquainted with my inner self.  It felt weird.  Then I questioned my very own being. Perhaps my past experiences and the people I met shaped the way I was.  But then, was that who I wanted to be?”

“I tried to change and become who I wanted to be.  The process was fascinating.”

The handpan was practically unheard of back then and has remained largely a foreign object nowadays. About four years ago, Chor tried his hand at this instrument without taking any lessons.  That was until he met a Japanese handpan player in a music practice venue.

The Japanese player passed on an honest comment, simply saying Chor was terrible.  The two hit it off right away regardless. He not only taught Chor to play the handpan but also became his best mate.  “One day, he saw that I was lovelorn and suggested I travel to Europe and learn the handpan from a teacher.”  He hit the road with HK$5,000 in cash and a few changes of clothes.  “My English proficiency was marginally sufficient. I even found it difficult to tell my teachers what I wished to learn from them.”

He set foot in Germany, Austria, Switzerland, Hungary and Italy, learning the ropes from three teachers. He spent eight consecutive days, eight hours a day with one of them.

That trip across Europe gave Lai more than be bargained for. “I was busking in Germany right at the scene of the Munich shooting. The city’s transport system came to a complete halt, my mobile phone ran out of juice and I did not speak the language.  Fortunately, I had the address of my accommodation scribbled on the back of my hand.  I asked for directions on they way back to the place.  I took me half a day.”

“Before the trip, my music was intense because of the hectic Hong Kong lifestyle. In Europe, people seldom use microphones and loudspeakers. Performing on acoustic emphasises the true sounds of handpan.  It was very cool.”

After a while, his introversion behind him and he gradually got the hang of busking. “I enjoy that feeling.  On the street, nobody knows you.  I have also become accustomed to harsh comments.”

“I was busking away one day and the street hawker on the opposite side of the street came up to me and gave me two red packets. I said: “No, you work hard for the money.  He replied, “I have seen many people play this wok but none was as good as you.  Add oil!”
“I was touched and totally lost for words. The usual performance cannot provide me that feeling.” 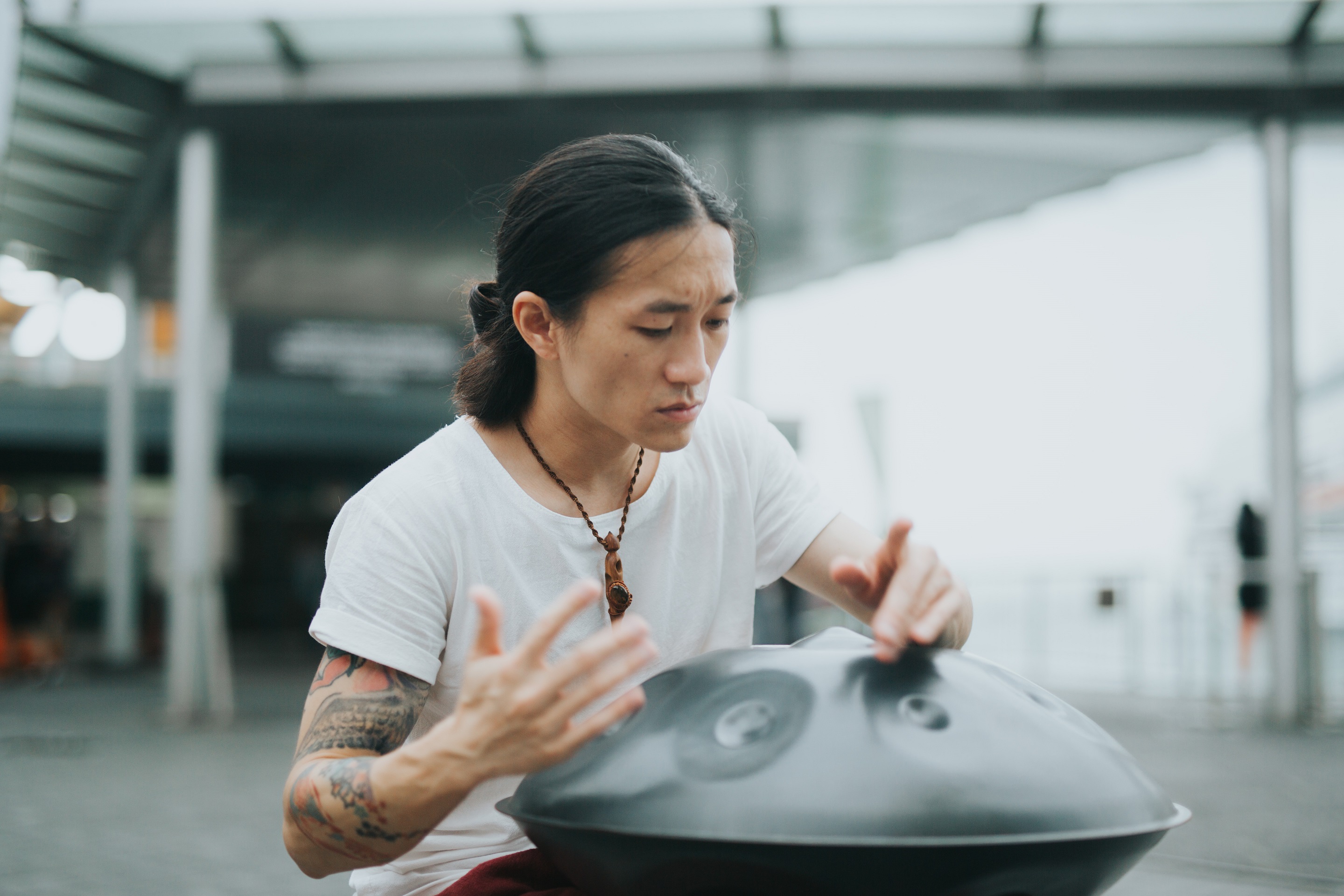 Busking gets more than from a usual performance

“I am skinned but I am happily so.”

Chor quitted his job for a career as a handpan player, giving up stable incomes for experiences, friendship and happiness.

He feels that Hong Kong people’s value is typical: getting an education, finding a good job, making more money and building a family. He wondered: “Should life follow this pattern?” His days as a salaryman were almost sickening – being stuck in the office from 9am to around midnight day in day out.

He asked himself what life is for.  Eventually, he had to step out of his comfort zone. “I am a simple soul.  I just want to pursue my dream. Rich or poor, it is a life of my own making. I am skinned but I am happily so.”

These few months he took another step forward and joined a number of overseas gigs in places such as Shanghai, Dali, Thailand and Japan.

His Thailand excursion still brings tears to his eyes.  “I got to rub shoulder with some of my most admired musicians.  All of them were world-renowned top players.  Although we added each other as Facebook friends and we said hello to each other before, I was pretty much non-existent there.  I was a little bit upset about that.”  Of course he did realise that he was nobody then.

After the gigs, a seasoned musician said to him: “I am pleasantly surprised that Hong Kong has a musician like you.” That remark made his day.  “My hard work paid off eventually, and people can see it,” he stated, with tears in his eyes.

How hard? “People in Hong Kong may be able to spend an hour practising at most but I did four hours.  And if that were not enough, I would put in two more hours.  I might as well do eight or even 10 hours.”  When it comes to handpan, he believes, a natural flair can be important but hard work is key.

“It is good to have a talent but it may constitute just 10% of success and the rest has to be earned via hard work.” 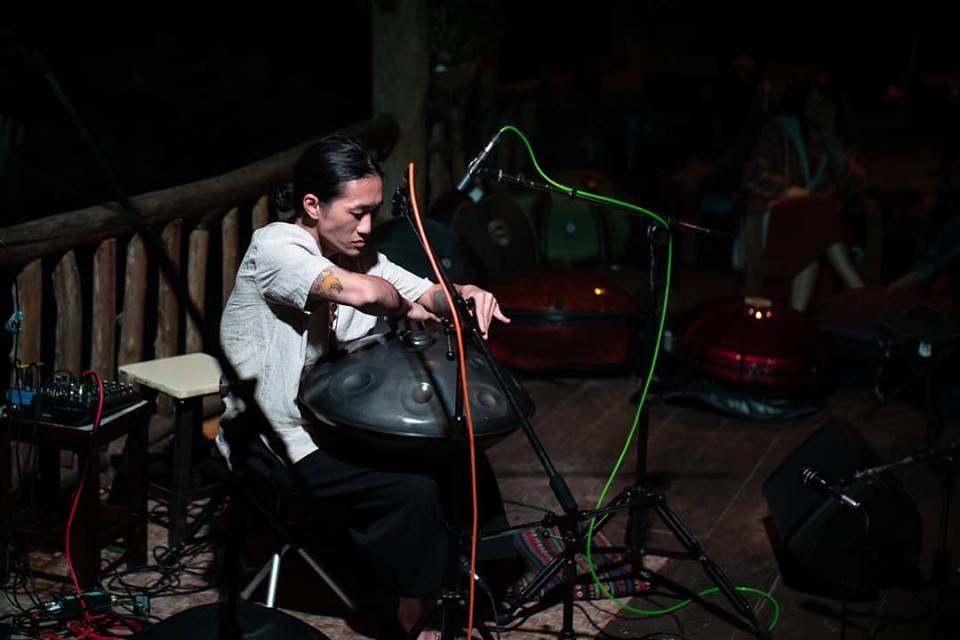 Being tops mean nothing

The saying “As you sow so shall you reap” may sound like a cliché.  Nothing is for certain though.  Going the extra mile is considered normal.

Music, like any other art forms, is never about winning. “Music facilitates an energy exchange with the audience. Some people in the audience do get the messages and stories in my music. One of them come to my performance every time.  Once he came up and said that the same tune took on a different meaning to him every time. Another one said he was inspired by my music while some others had said that they would seek a change of pace or shift their focus more on personal issues.”

“I tell my own stories but I cannot tell what the audience gets. People may have a different take on my music.  This makes music magical.”

Last year, Chor’s goal was to become Asia’s top handpan player. International stages gave him deeper insights. “Being tops mean nothing.  Musicians express themselves in more ways than one and in different styles. This year, I want to play my music and play it well.  I am happy to see myself doing better every day.” 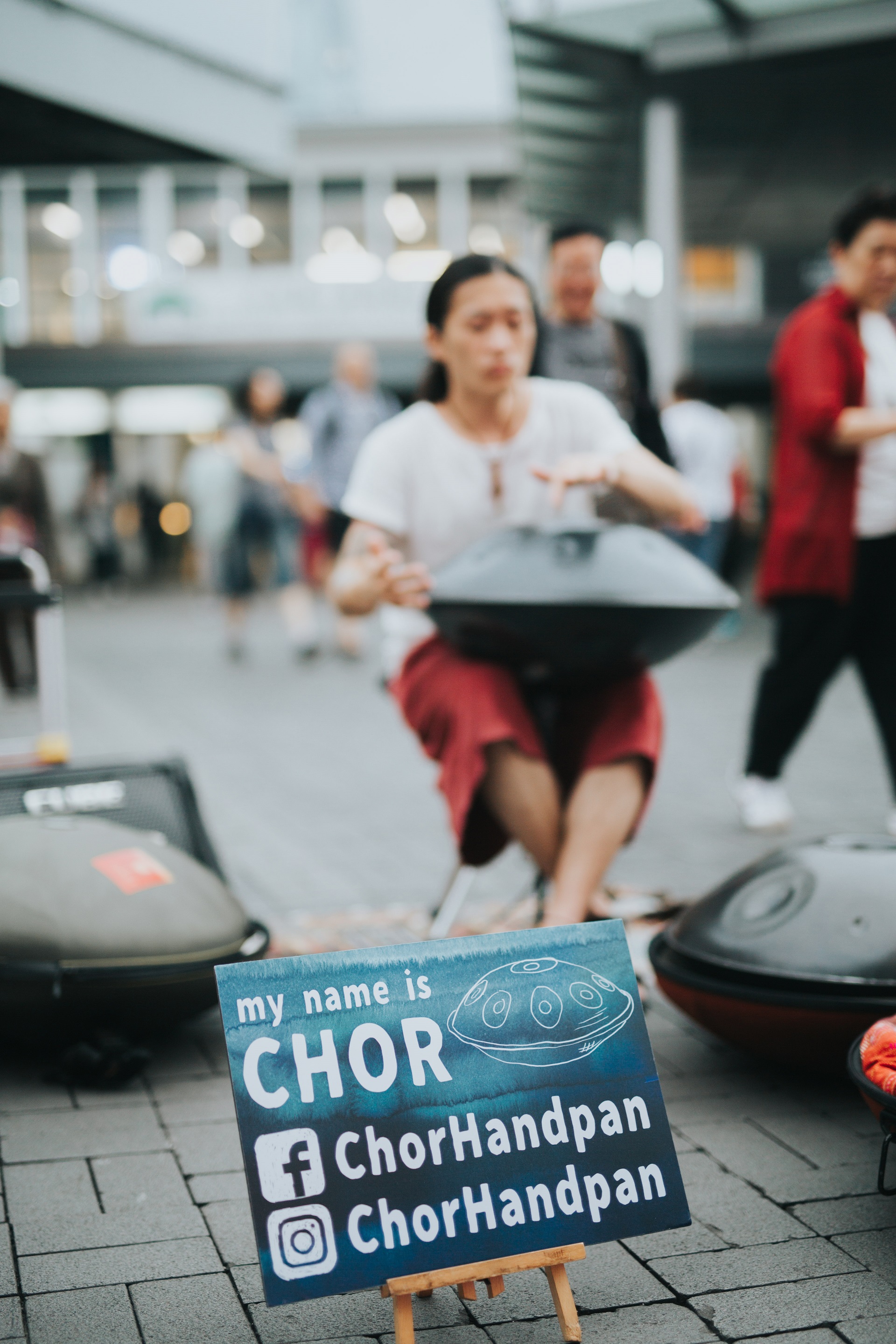 His name is Chor Lai, a Hong Kong-born handpan musician.

Jacky Yu : The best way to safeguard history is to study history
Scroll to top