Poon Yuen-leung : Making an issue of Hong Kong’s situation? …As you like it

When the film Ten Years depicts Cantonese-speaking cabbies as the marginalised; when primary school students were penalised for speaking Cantonese at school; when “standing up for Cantonese” (撐廣東話) became an internet keyword…… Cross-decade lyricist Poon Yuen-leung has the following to say about setting a theme for Cantonese-dominant stage performances: “Creativity does not have to come with purpose.  An interesting theme for a performance has to concern the audience, click with them and inspire feelings.  This is how audience relations are built.”

Poon says, “The happiness is real and I am very lucky.”

He is not just a man of romance

Poon graduated from The Chinese University of Hong Kong with a journalism degree in 1981.  He started his tertiary education originally in history and made the shift after the first year.  “History was my favourite secondary school subject but I opted for the more intriguing discipline of journalism later because today’s news is tomorrow’s history.”  During university, he had a chance to learn the ropes from TVB’s head of news Leung Tin-wai as an intern.  After graduation, he became a foreign news translator.

Did he ever have to chase news?  “I did that for a couple of years.”  Was he ever a hot-blooded journalist?  Not quite.  “I found myself more into creative writing.  Nobody creates news.  I wanted the trick of the trade though.  Then I took my career to Asia Television and became an assistant director.”  He is passionate about creative production, he said, “especially about turning creative ideas into reality.”  Subsequently, he signed up with RTHK as an assistant director and screenwriter and later as a screenwriter for Cinema City where he wrote the script of the film Banana Cop.  He approached the film’s producer Teddy Robin and leading man George Lam and put himself forward for the lyrics for the theme song Big Step Forward.  The song, which was sung by Lam, became a smashing hit.   Poon was winning at the starting line, so to speak.

Poon is not just a man of romance.  In 1988, he penned the lyrics to Tat Ming Pair’s Do You Still Love Me, An Impromptu Murder (沒有張揚的命案), I Should Be Very Happy Today and Comrades (同黨) and in 1989 gave Tat Ming Pair Ten Fire-fighting Youths.  It may appear that Do You Still Love Me is a innocent love song, but some people take it as questioning China and the UK’s longing for Hong Kong, just as I Should Be Very Happy Today was thought to be about the waves of mass migrations from Hong Kong back then and Ten Fire-fighting Youths was about the state of being apathetic to others’ troubles.  Benny Tai Yiu-ting in a 2017 article used “fire-fighting” as a metaphor for participating in the pro-democracy movement in Hong Kong.

He quipped: “Believe what you want to believe.  I am only minding my own business.  I would not know how other people interpret my professional experiences and aspirations.  A chef can produce a chicken or beef dish.  A customer’s review on that dish well beyond the chef’s control and does not speak for the chef.”  He stressed that a creative worker’s job is to create and not to interpret.  “I do not have a great sense of mission or a desire to change the world or Hong Kong.” 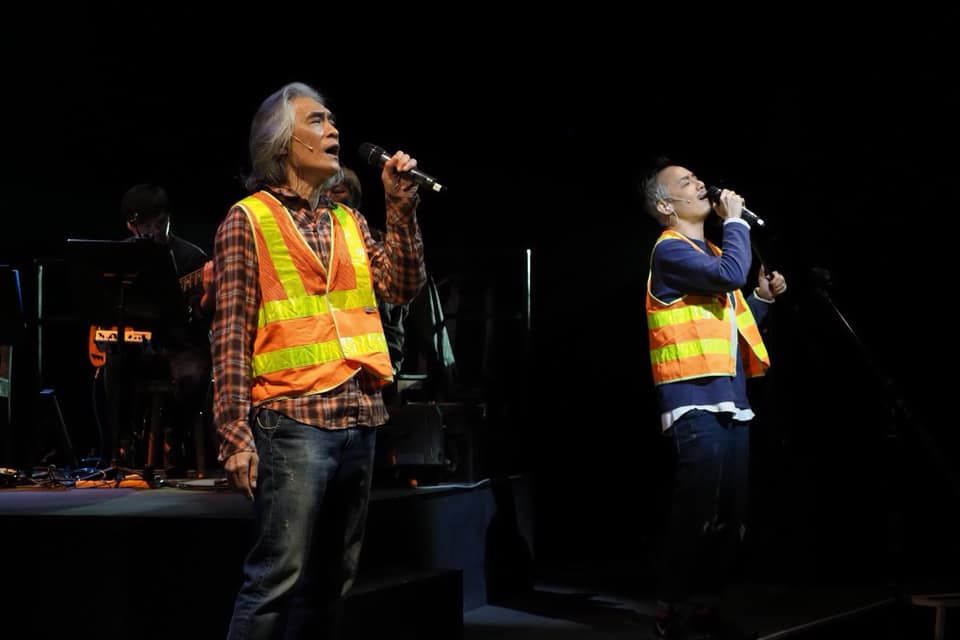 At his recent concert, the song Made in Hong Kong touched on various social issues (photo from Poon)

Like everybody else, Poon is in touch with Hong Kong society.  But, social awareness is never spontaneous.  “Hong Kong is such a small place where a lot can happen at the same fraction of time.  This has always been a Hong Kong characteristic.”  At his recent concent The Nightmare of Cantonese with Poonsan concert (二次唱作流音樂騷 潘源良生炒廣東話之有辣有唔辣), the song Made in Hong Kong touched on issues such as white elephants, universal suffrage, DQ, corruption (government, business, rural people and the triad), hospitalisation, children learning Putonghua and English.  All of these stemmed from the same soil.

“I am not a purpose-driven person.  It (Cantonese stir-fry) has never been used as a concert idea before and was quite a fascinating one with ample space for creativity.  It also made sense with the audience.”  Poon did not go on about the concepts of his concert.  “I did not wish to make a statement.  If there were messages, they were there already for the taking although the interpretation was not mine to concern with because of the inevitable variables however insignificant they might have been.  Variables and possibilities do exist during the course of communication.”  He also used a classical concert as an example.  The conductor and the orchestra are there not to play but to inspire thoughts and take the audience onto different dimensions.   “It is up to you to interpret and make sense of a message.  It has nothing to do with the creator.”

He stated that he has reservations about collective actions.  He simply does not feel fit it.   For this reason, not only did he shy away from social movements but he would also feel hesitant to go to a concert.  He believes however that people assert power in their own way.  “I detest empty rhetoric and would just let actions speak.  Shut up and take action.  Talk is cheap.  If you can see the worth in certain things, don’t hold back.”

Did he ever worry that the space for creativity is narrowing?  “I cannot bring myself to worry about something that has not happened.  For whatever that has happened, just deal with it.  At this very moment, there are many feasible ways of expressing ideas on the internet or on stage.  Nobody knows what the future holds for Hong Kong.  Worry is vain.”  He repeated: “Misfortune can be a blessing in disguise, and it goes the other way round.”  He added, “Do your job well, care for the people around you and take it from there.” 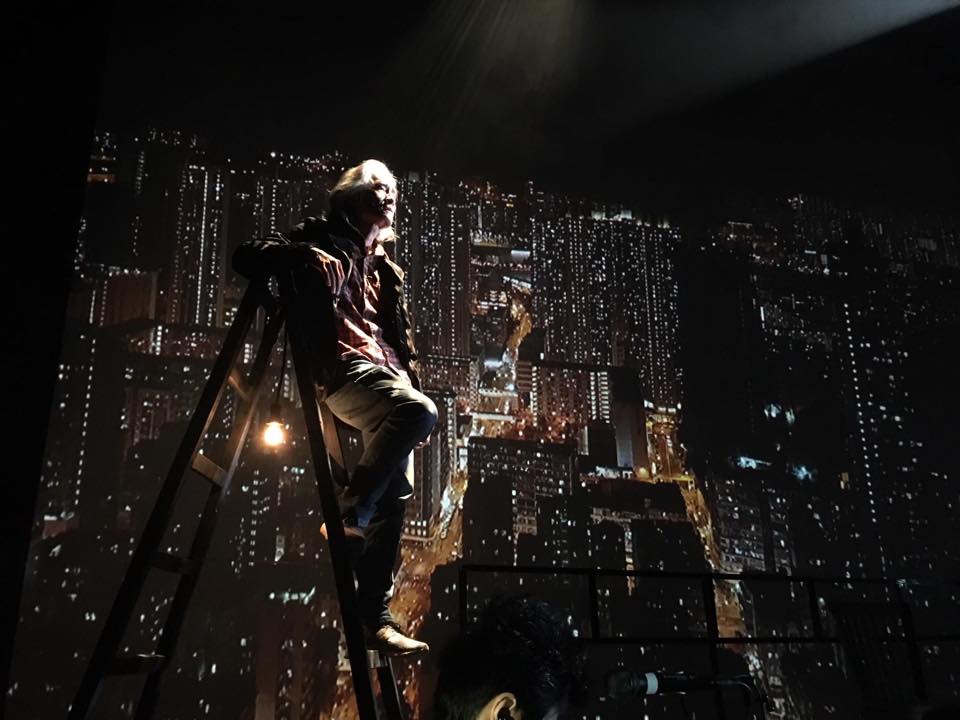 “We are not so gloomy afterall”

Poon remarried last September.  His current wife Rita is also in the creative industry.  Would this marriage between two creative thinkers spark creative power?  He said he would not rationalise or analyse the chemistry between them.  “The happiness is real and I am very lucky.”

Rita had a “small secret” to tell though.  “I had no idea he knew how to laugh.  Nor did I know he could be that happy.”  She conceded that Poon has always been a quiet, composed person.  “On our wedding day, I thought he would keep his cool while showing his gratitude to our guests.  I was pleasantly surprised that he was truly ecstatic.”  Happiness is now part of their lives together.  “He used to be quiet and he kept himself to himself but now he is eager to exchange thoughts.”  One day along the creative process of The Nightmare of Cantonese with Poonsan, Rita’s mini carpool karaoke triggered his creativity.  “It was spontaneous and fun, and nothing like a brainstorming or review session.”

A Canadian resident, Rita said that the bigger meaning of the concert was that it allowed them to meet lots of people who love Hong Kong.  “Not all the people we met were celebrities.  They were an enthusiastic bunch.  Educators, for instance, teach their student proper values for the future development of Hong Kong society.  It seems that we are not so gloomy (on Hong Kong’s future) after all.”

If there were messages in Poon’s creative, they were there already for the taking