Two people, one in Hong Kong and the other in mainland China, connected by an email.
Their relationship goes way back to 12 years ago.
Chance brought them together but this is not a story of love.
Two micro artists, one versed in model engineering and the other in food replicas, make a perfect team.  Over a stretch of the last few years, their skilled hands have restored the true face of the Woo Cheong Pawn Shop, a Manchu-Han imperial feast, the squatter village at Mount Davis’ foot, and the coming attraction – Lai Yuen (the Lai Chi Kok Amusement Park  ). 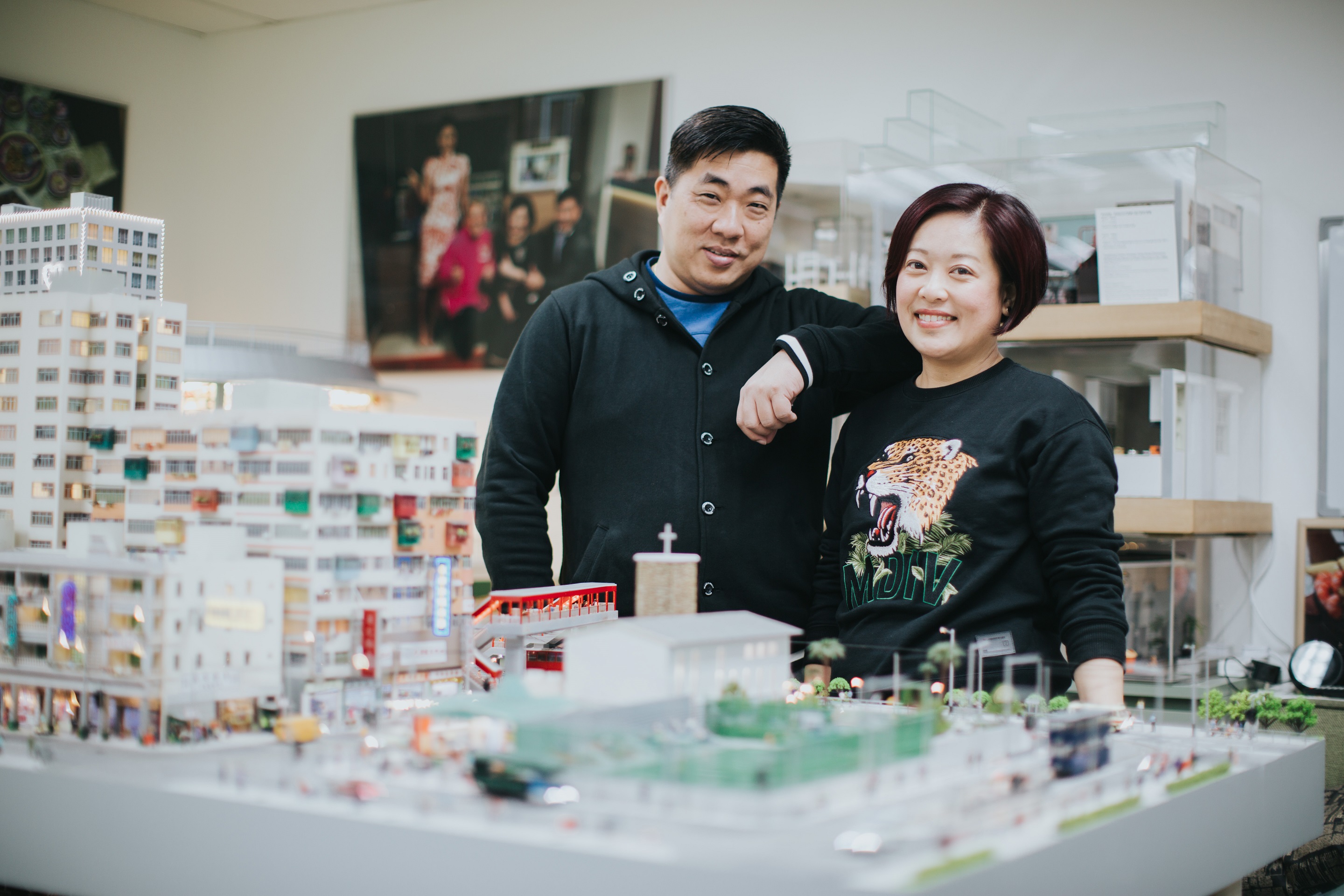 Two micro artists, one versed in model engineering and the other in food replicas, make a perfect team

The artistic pair engaged in micro art for the enduring memories of their parents.

Maggie Chan remembers her happy childhood – a time when her father would take her mother, elder brother and her to savour the city’s delicacies.  “I miss my father.  One day I found out from the internet that people use clay hand building techniques to construct miniature clay food dishes.  I wanted to give it a try.”  Her first public work was a midnight dim sum shop.  “I like to make dim sum dishes because my father always took us to a dim sum restaurant in Tsim Sha Tsui – the kind that had dim-sum trolleys.”

Subsequently, she signed up with the Hong Kong Miniatures Art Society as a voluntary secretary.  In 2007, the organisation was planning for an exhibition and she happened to see Tony Lai’s miniature models on the internet.  Like knows like.  She immediately emailed Tony an invitation to contribute to the exhibition.

An architectural model maker with 30 years of experience under his belt, Tony is a project manager stationed on the mainland.  His job does not require him to get hands on with model building.  “I would sometimes get ‘itchy fingers’ so I made micro models in my spare time.”  He promptly answered Maggie’s invitation.

The exhibition was about buildings in the Wan Chai vicinity.  For this, he built a 1:50 model of the Woo Cheong Pawn Shop.  “My mother and I used to live in Wan Chai.  Wan Chai’s most historical building has to be the Woo Cheong Pawn Shop which has a heritage of more than 100 years.”  He visited and researched the site, took photos and eventually came up with a detailed, true-to-life replica.  His efforts were most admirable. 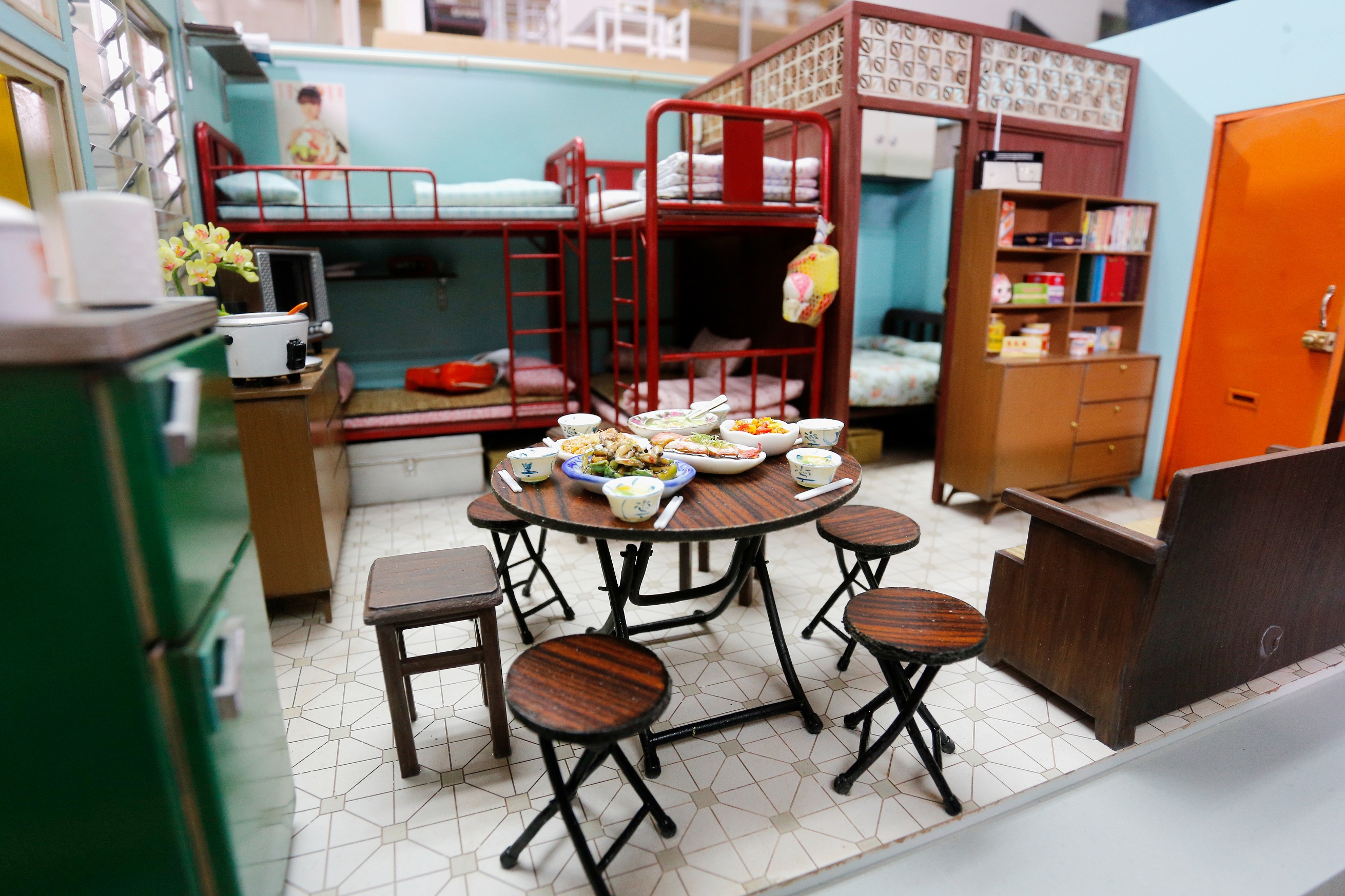 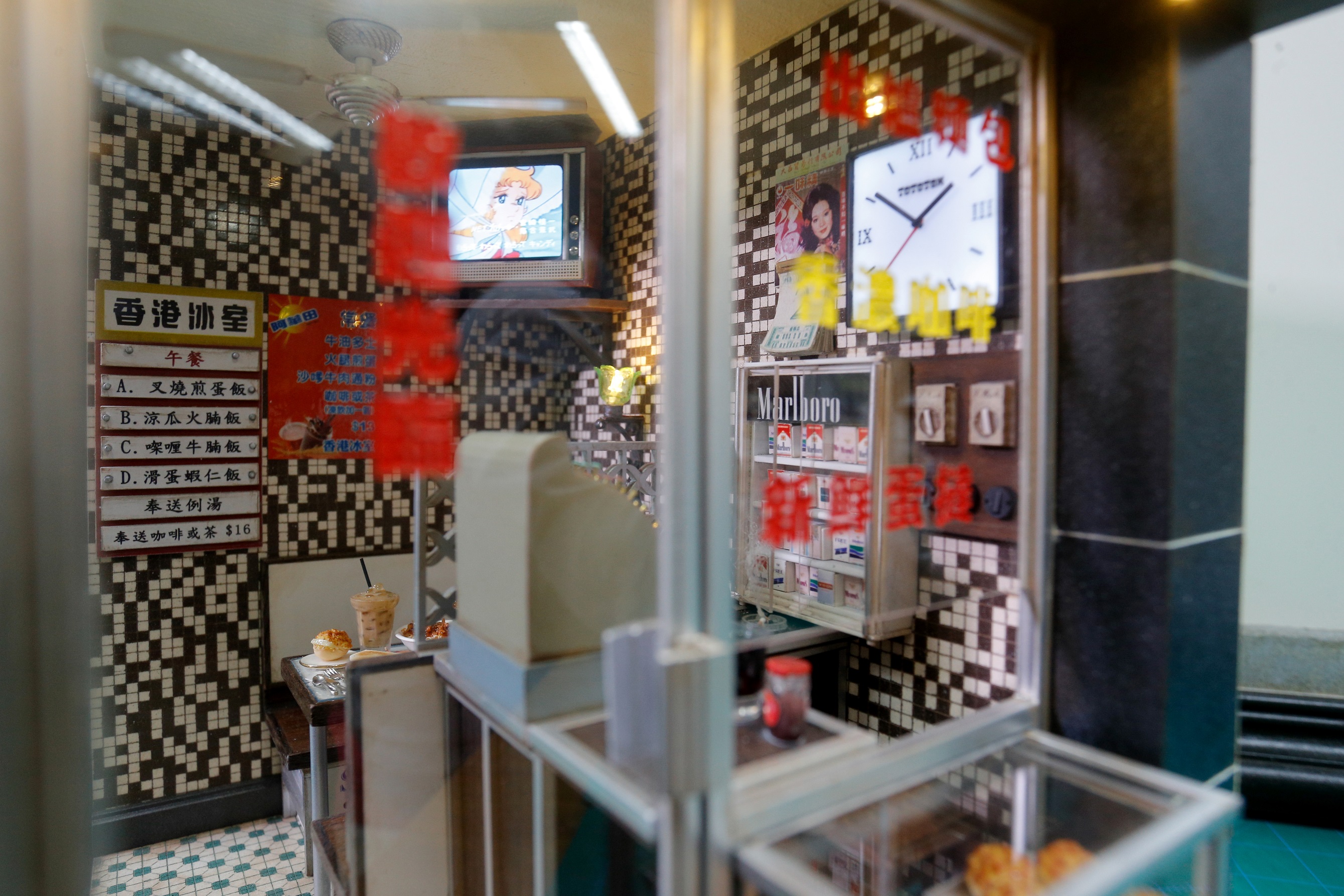 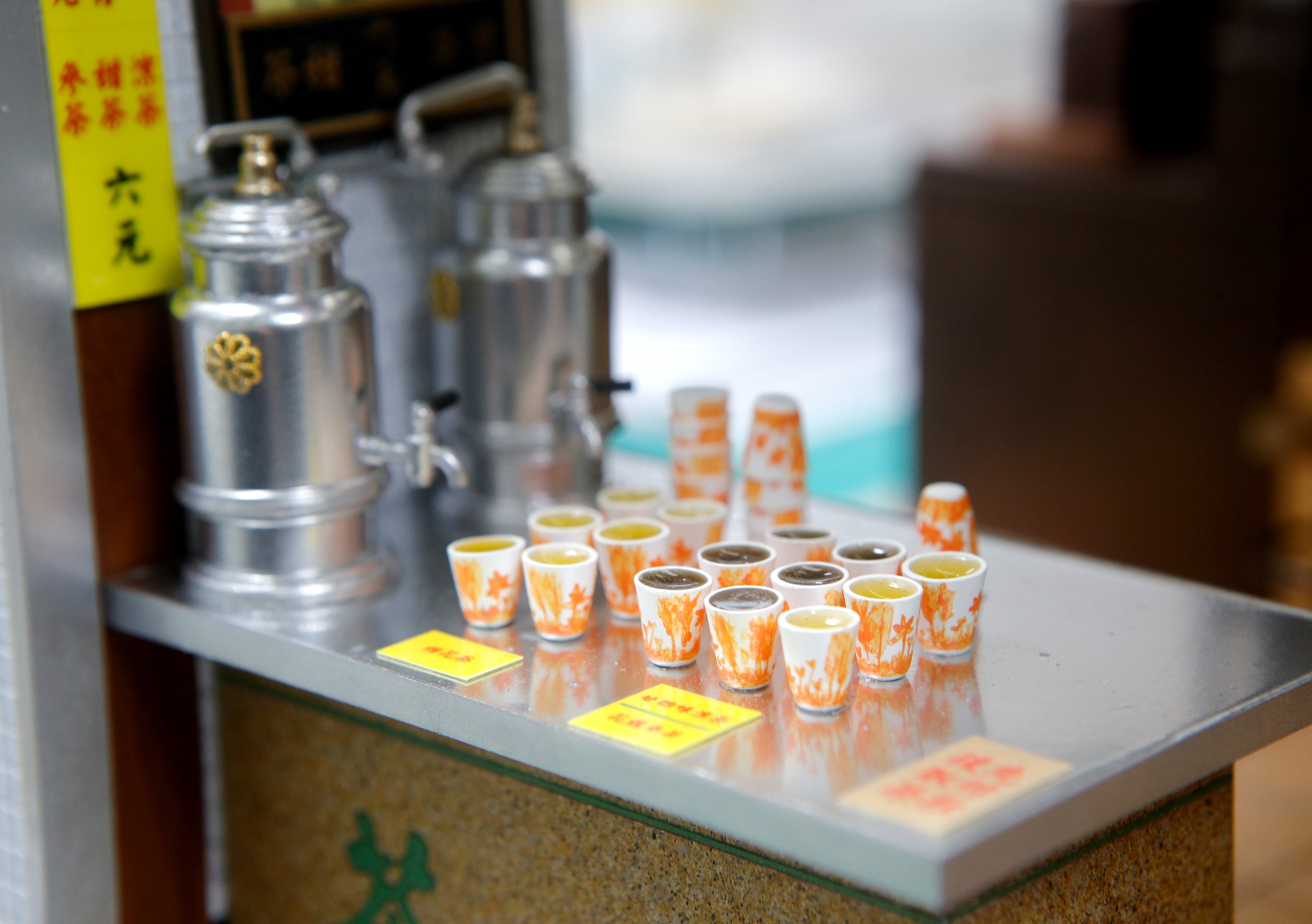 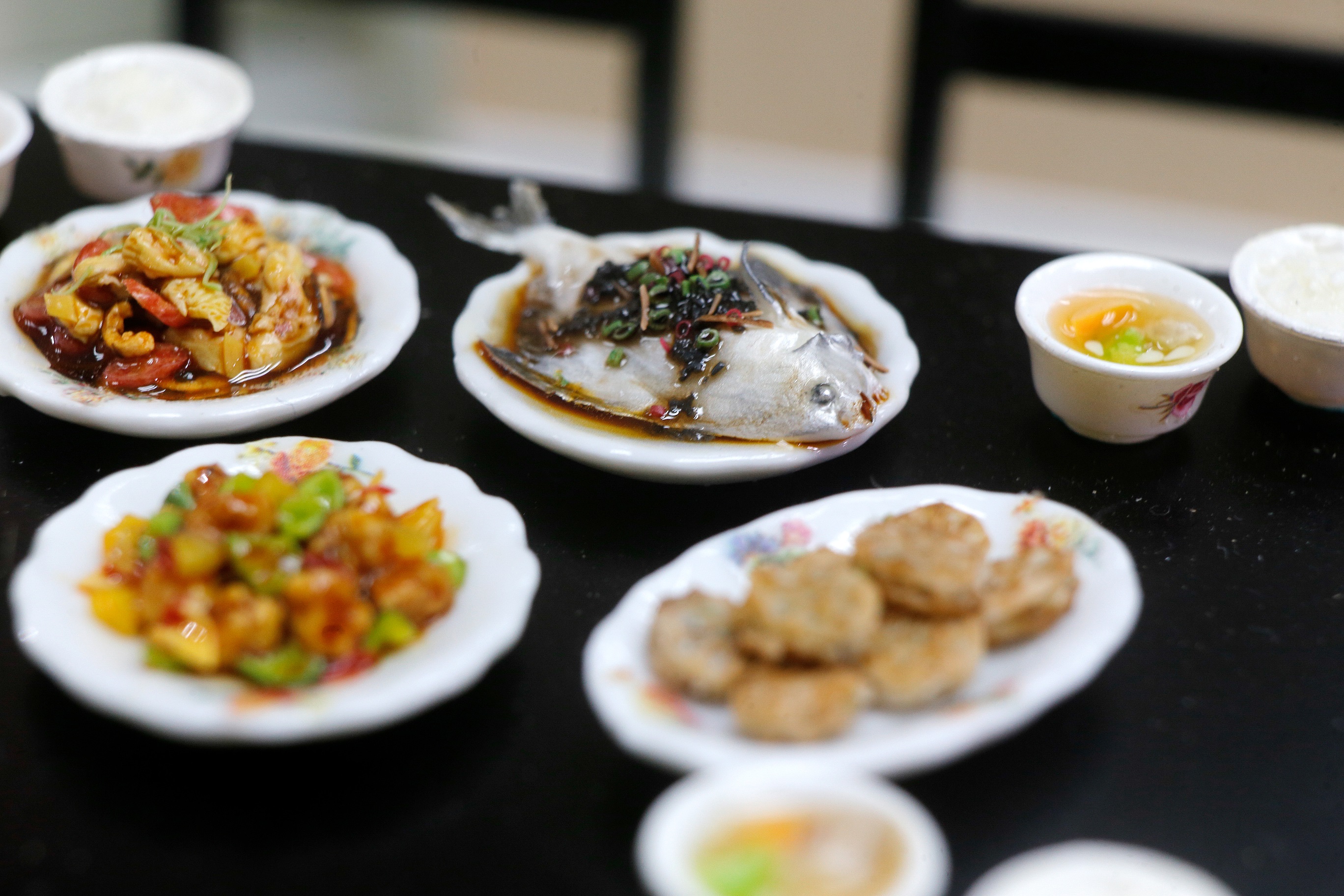 How could you not be impressed?

Back to the past

Micro-scale modelling is more than a simple hobby.  It requires a real talent and craftsmanship in addition to patience and enthusiasm.

A micro model takes about three months to produce with two thirds of that time spent usually on research.  This is because most of the objects no longer exist.  Inadequate visual record also makes it almost impossible to achieve a 3D replica with the right scale ratio.  In many cases, it may be necessary to harness the imagination.

Once production begins, there is no stopping the creativity process.  For three months in a row, the pair worked day and night.

That year, Tony’s health deteriorated but he took such pleasure in producing models one after another.  The scale of his sets got bigger.

He is pleased to see elderly people visit the exhibition with their young.  “There were families of three generations.  Some people came on a wheelchair while some others had their walking sticks.  They came to rekindle the memories.  I got quite emotional and I felt that I made the right decision to take part in the exhibition.” 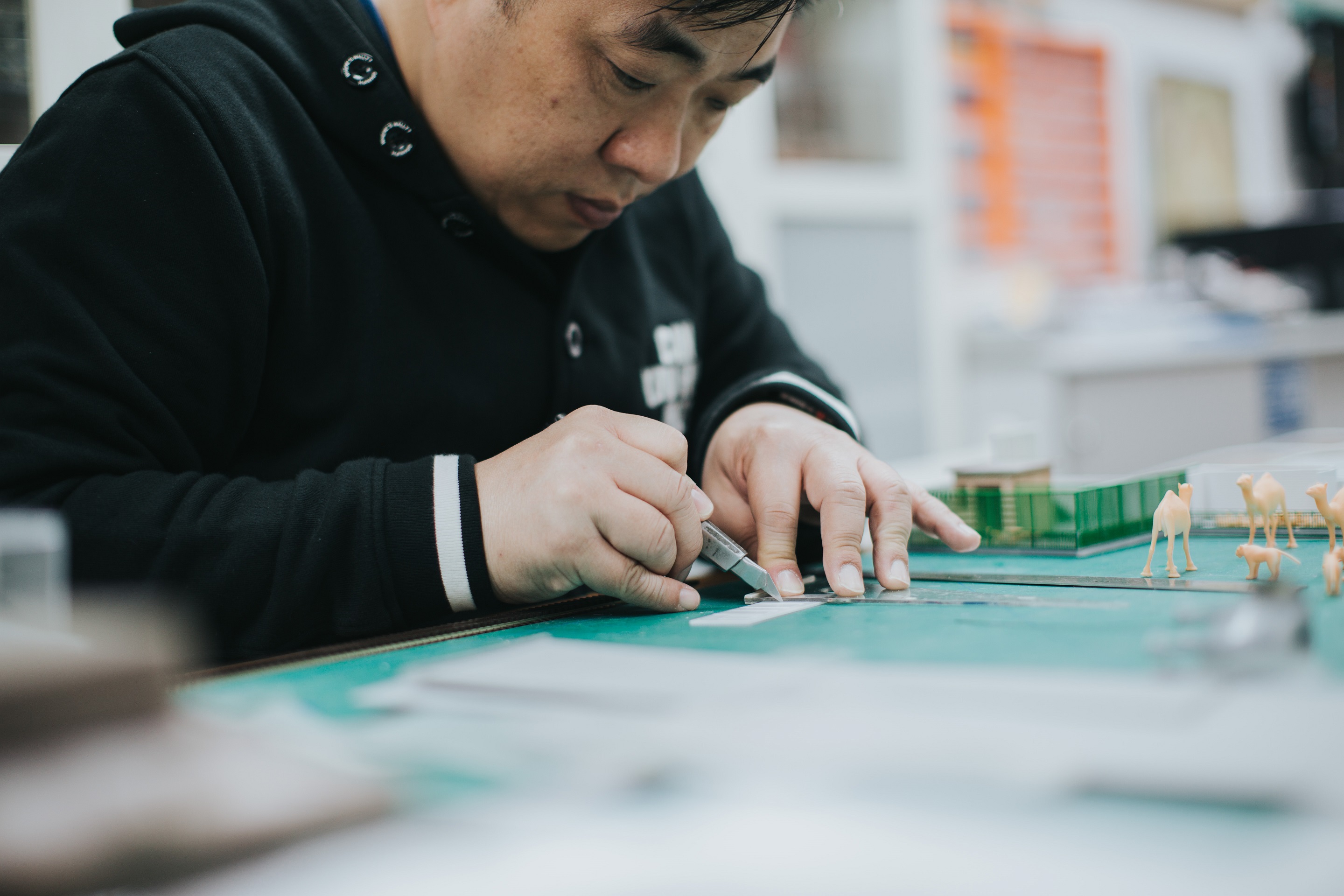 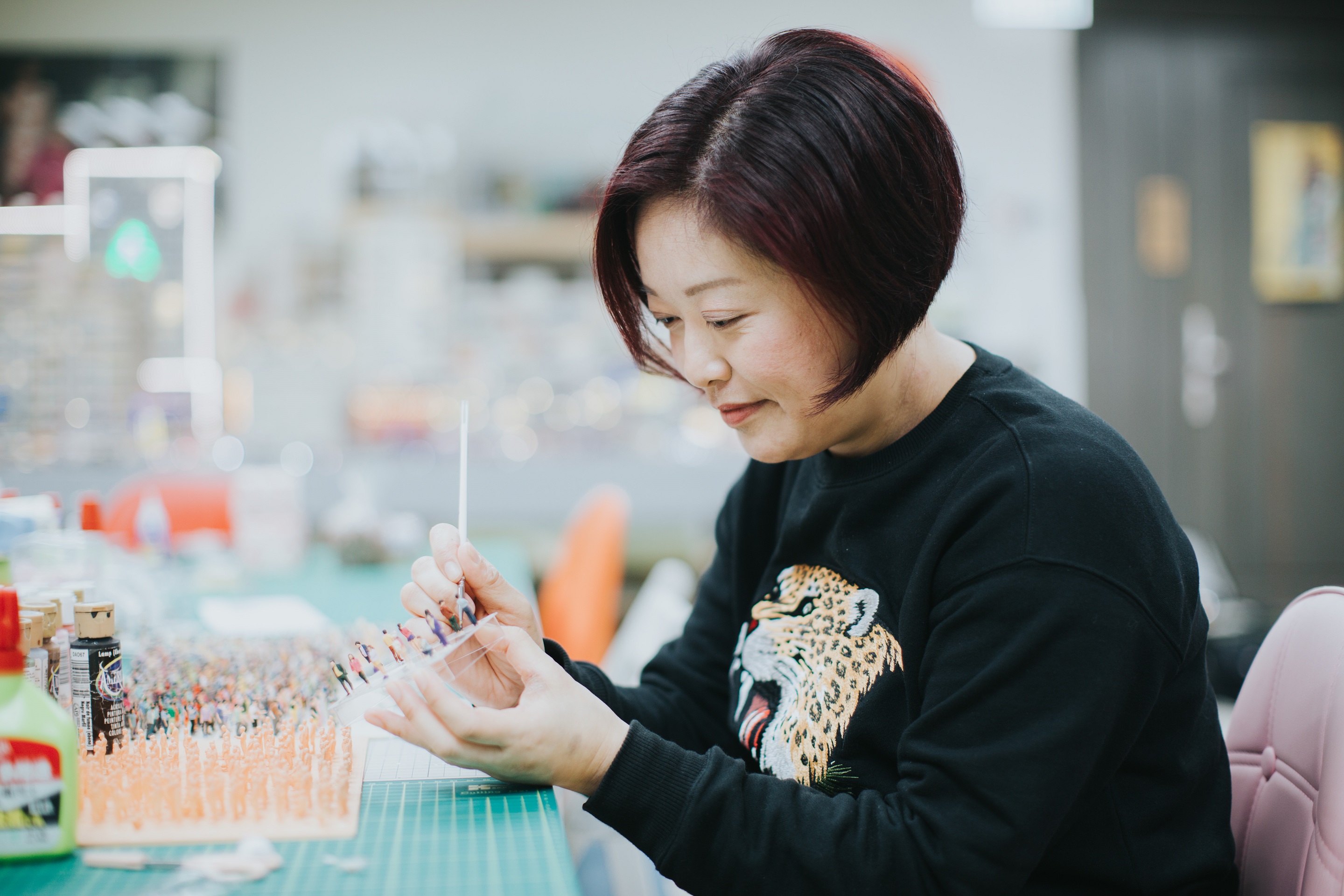 Tony has always said that the older he gets the fonder he is of Hong Kong.  “Things in the past are slowly vanishing.  It is a pity.  I hope to contribute my old memories and help bring them back to life.”  Maggie said that micro-scale modelling is not a lucrative business.  “It is a hobby for life.  To me, this hobby carries great significance.”

For many years, the pair of them have produced a large collection of models under the theme of old Hong Kong.  This has included a Manchu-Han imperial feast, the Deer Cry banquet ( 鹿鳴宴 ), the Tai Hang Fire Dragon Dance, the squatter village at the foot of Mount Davis and an Hong Kong old shop series (beauty salons, Chinese tea houses and herbal tea shops).  The meticulous craftsmanship underscores the seamless collaboration between Tony and Maggie.

Tony’s miniature beauty salon, for instance, features astonishingly minute details such as water-stained skirting boards, spots of rust on the styling chairs, a magazine with Teresa Teng on the cover, as well as a TV set with the Ganbare Robocon cartoon on.  Meanwhile, Maggie’s fresh buns, coffee, egg tarts, luncheon meat and egg noodles look good enough to pass off as genuine. 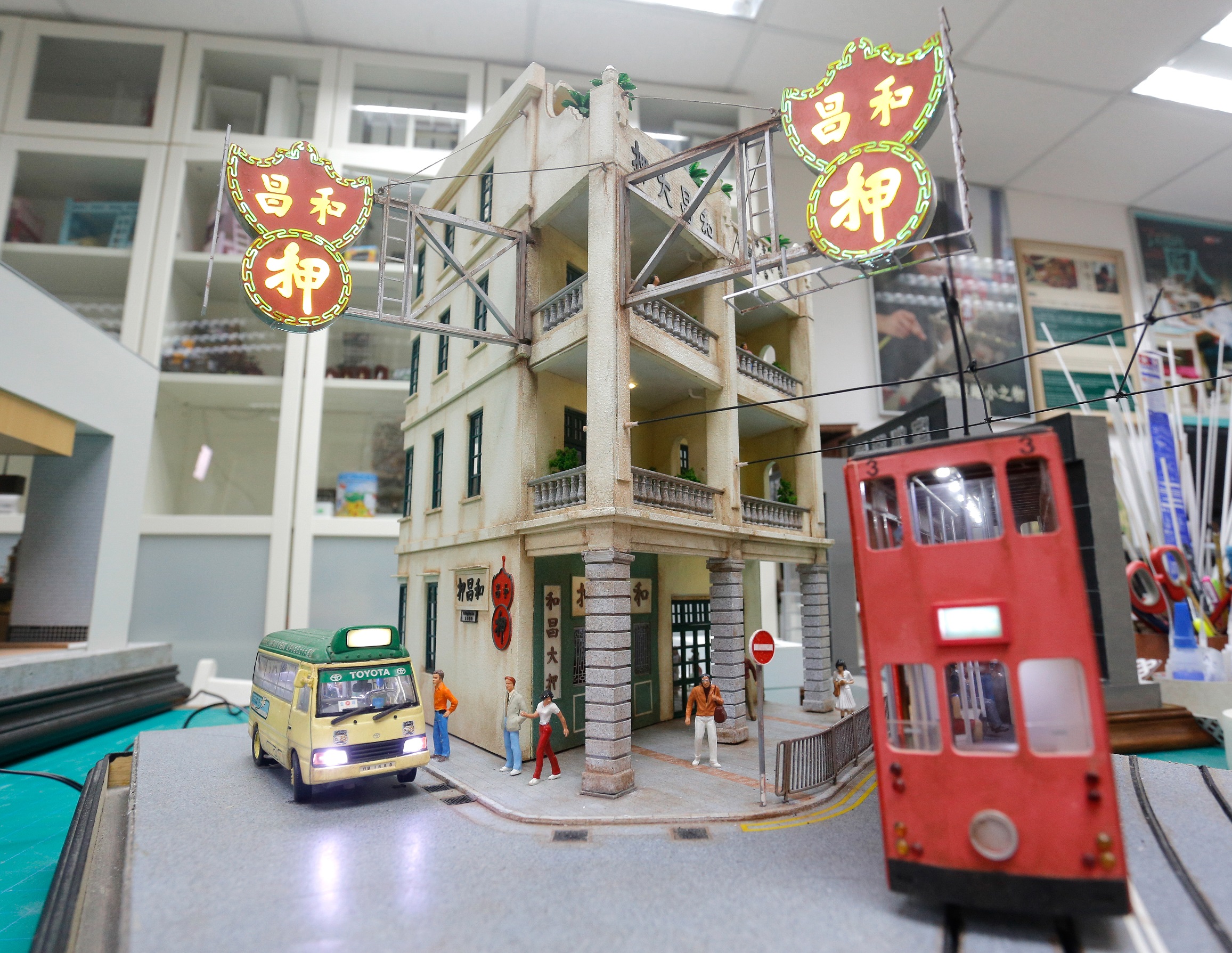 The first public work of Tony

For the exhibition which was held in Times Square in Causeway Bay, Tony and Maggie over the course of 2018 produced six large-scale model sets that recreated Hong Kong’s Christmas scenes in the 80’s including Christmas in Central, the revolving restaurant, a playground, an old cinema, a housing estate as well as a bustling street which involved the participation of 35 young students.

“We wanted to take people back to the 80’s and revisit our childhood or experience Christmas in Hong Kong at that time.  Christmas in Central, for example, offers viewers a glimpse of the old HSBC building.  The Queen’s Pier and old Star Ferry Pier, in turn, give us a peek at Hong Kong’s prosperity back then.”  Tony said that the exhibition was a real challenge so much as that he had to keep modifying his works.  ”The first thing that sprang into my mind was the revolving restaurant because a Christmas feast was no more than a dream when I was a child.  I grew up in a public housing estate.  My parents seldom took me out for a meal.”  Maggie, who was responsible for the production of food models, joked that the atmosphere is retrospective but the food items belong to the modern time.  ”Buffets in the 80’s offered cream cakes and gelatine sweets as desserts.  They are anything but mouth-watering.”

The replica of an old cinema best demonstrates Maggie’s food modelling skills.  In front of the cinema are a delightful line-up of street hawkers selling BBQ squid, beef offal, three stuffed treasures, stinky tofu, fish balls and roasted chestnuts, roasted sweet potatoes, spring field pizza and aeroplane olives.  These were all old Hong Kong delicacies.  “People said that they could almost taste the BBQ squid when they saw the models.”

What gives the exhibition an extra dimension is the engagement of 35 students in the production of a Hong Kong street.  “We put Hong Kong’s unique features into the models including tenement houses, a church and trams which run in front of market stores and the cinema.  The students helped with the production of the few dozens of stalls.”  Tony noted that the models are 1:87 whereas the students usually do 1:18 ones.  “The students demonstrated such commitment and dedication.  Models of this scale are very difficult to handle but the students even produced the meat products for the meat stalls.”  It all sounds very heart-warming. 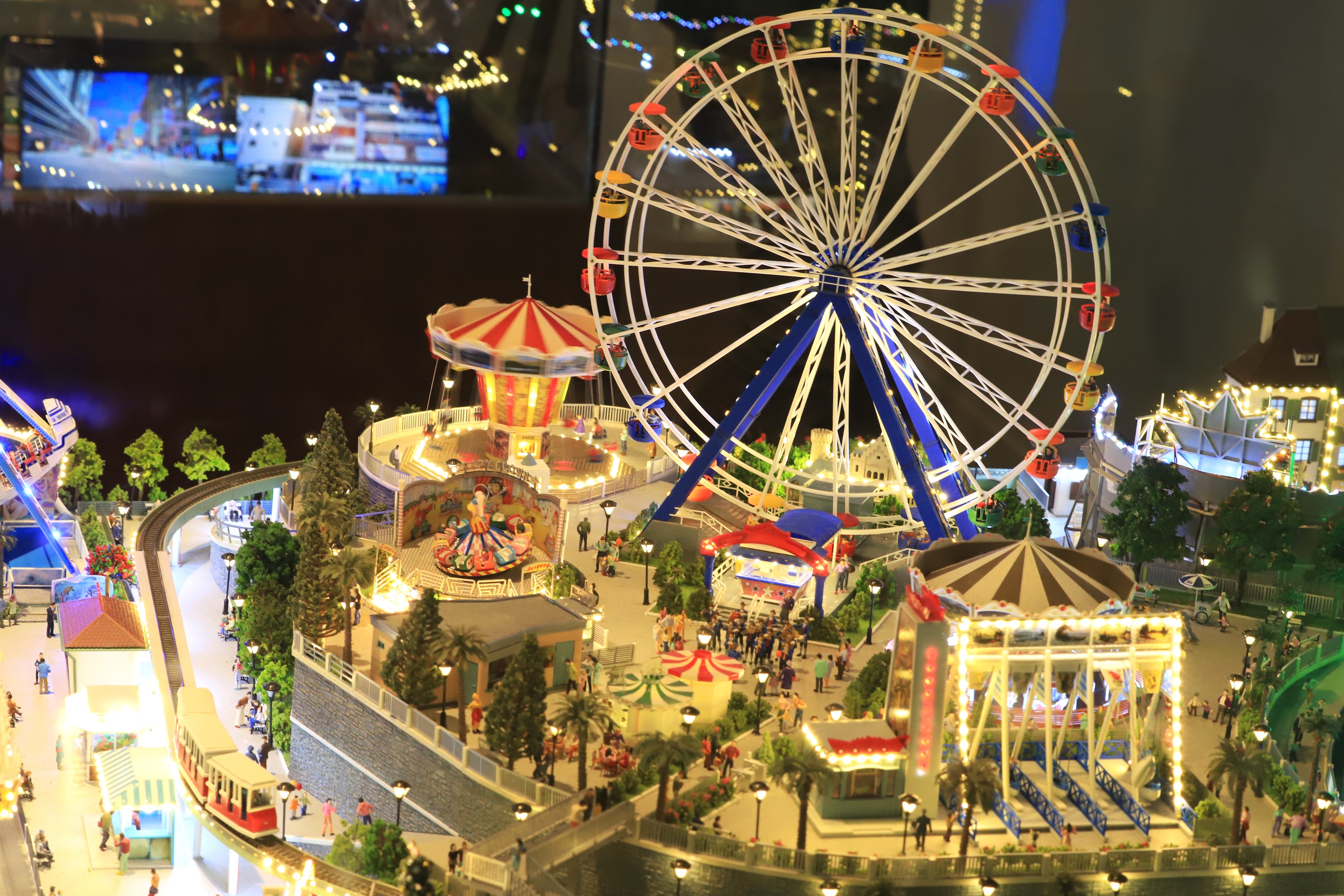 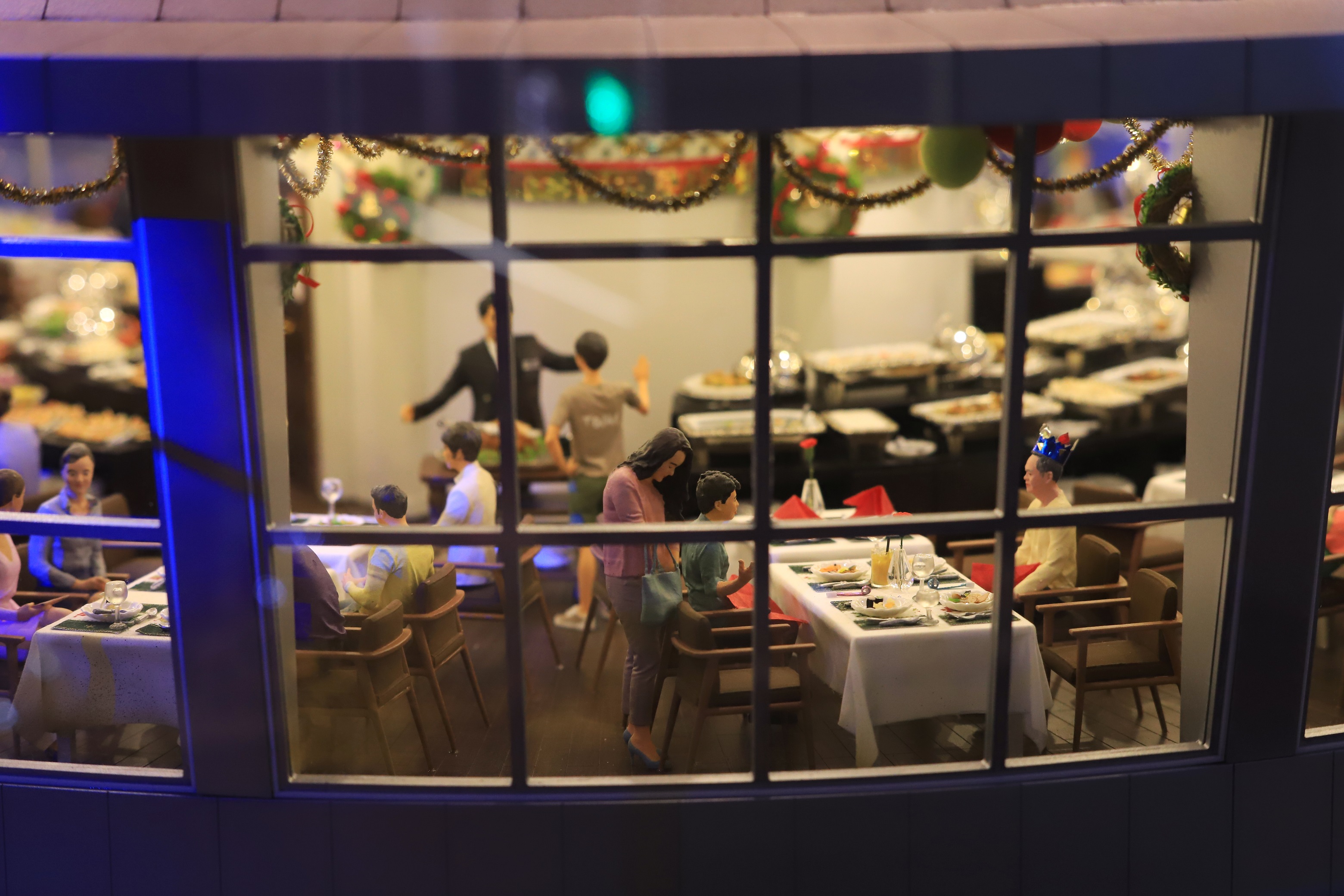 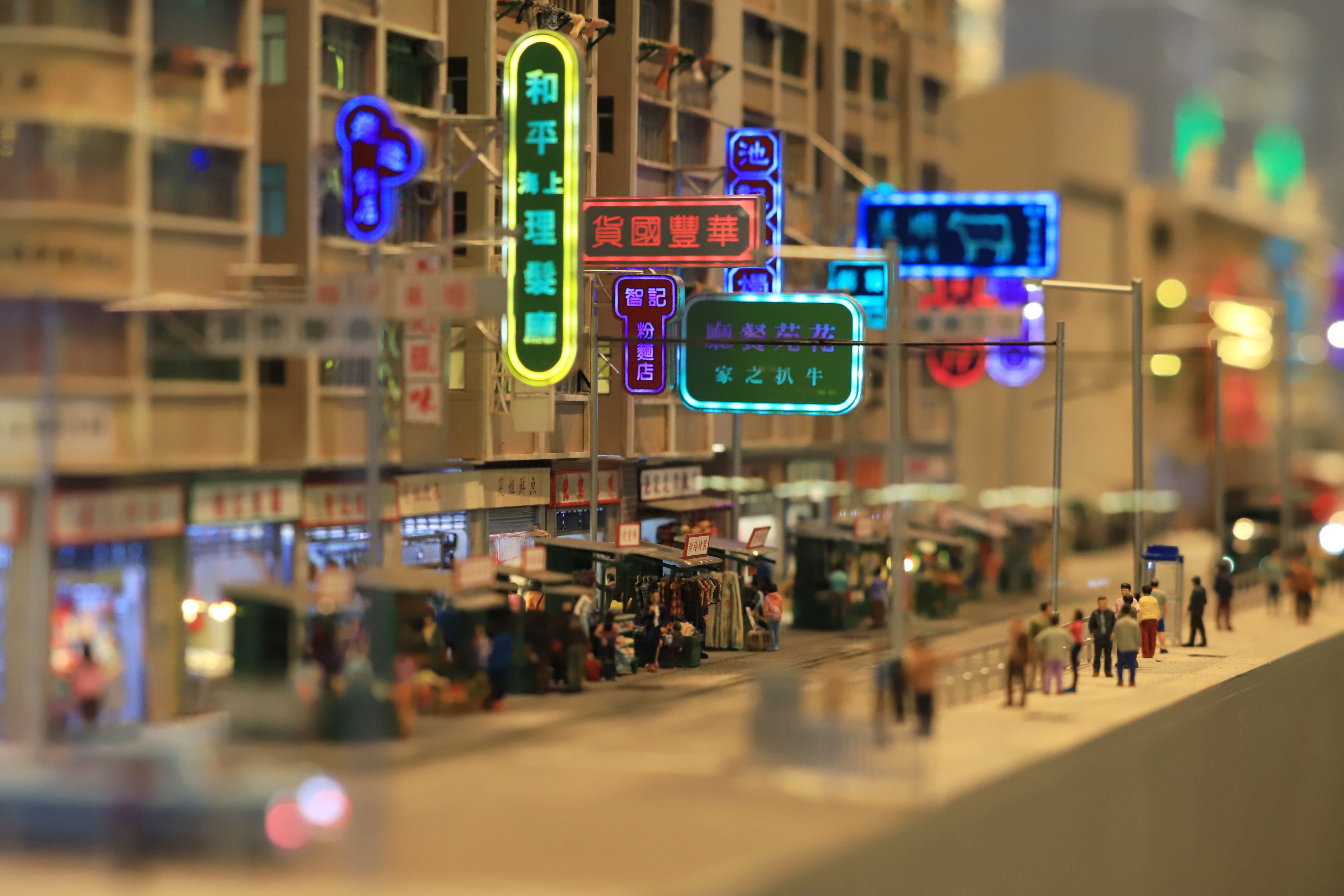 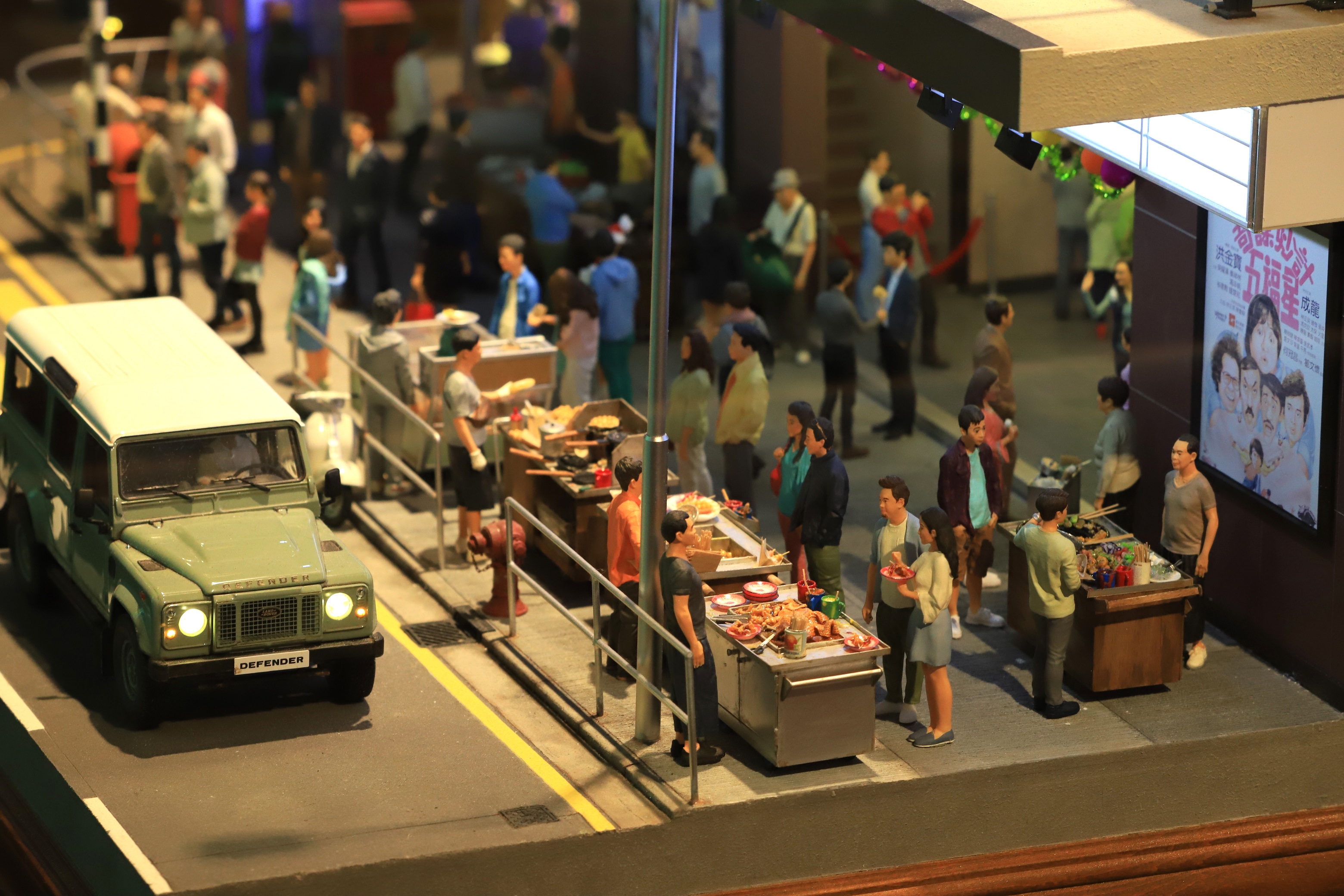 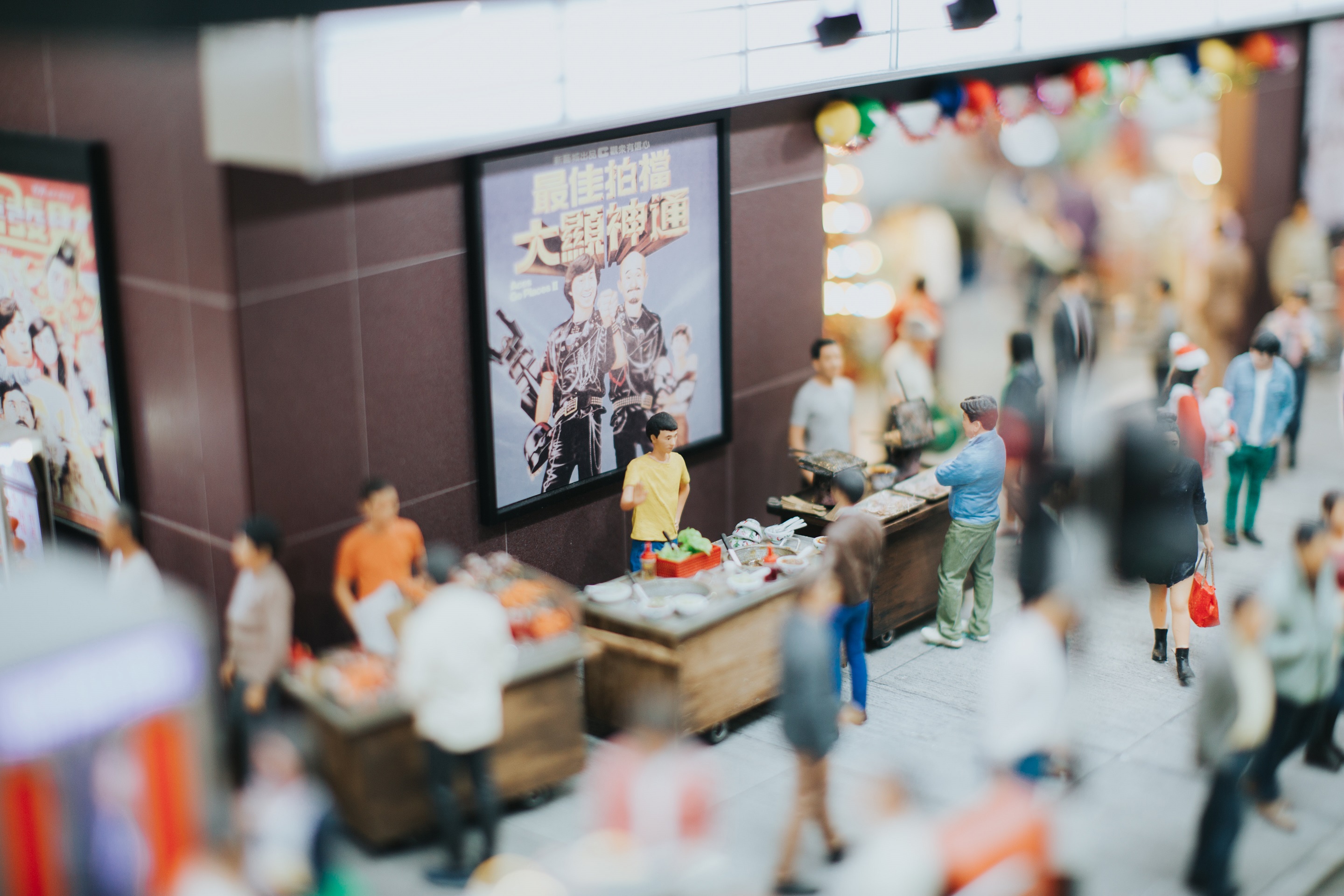 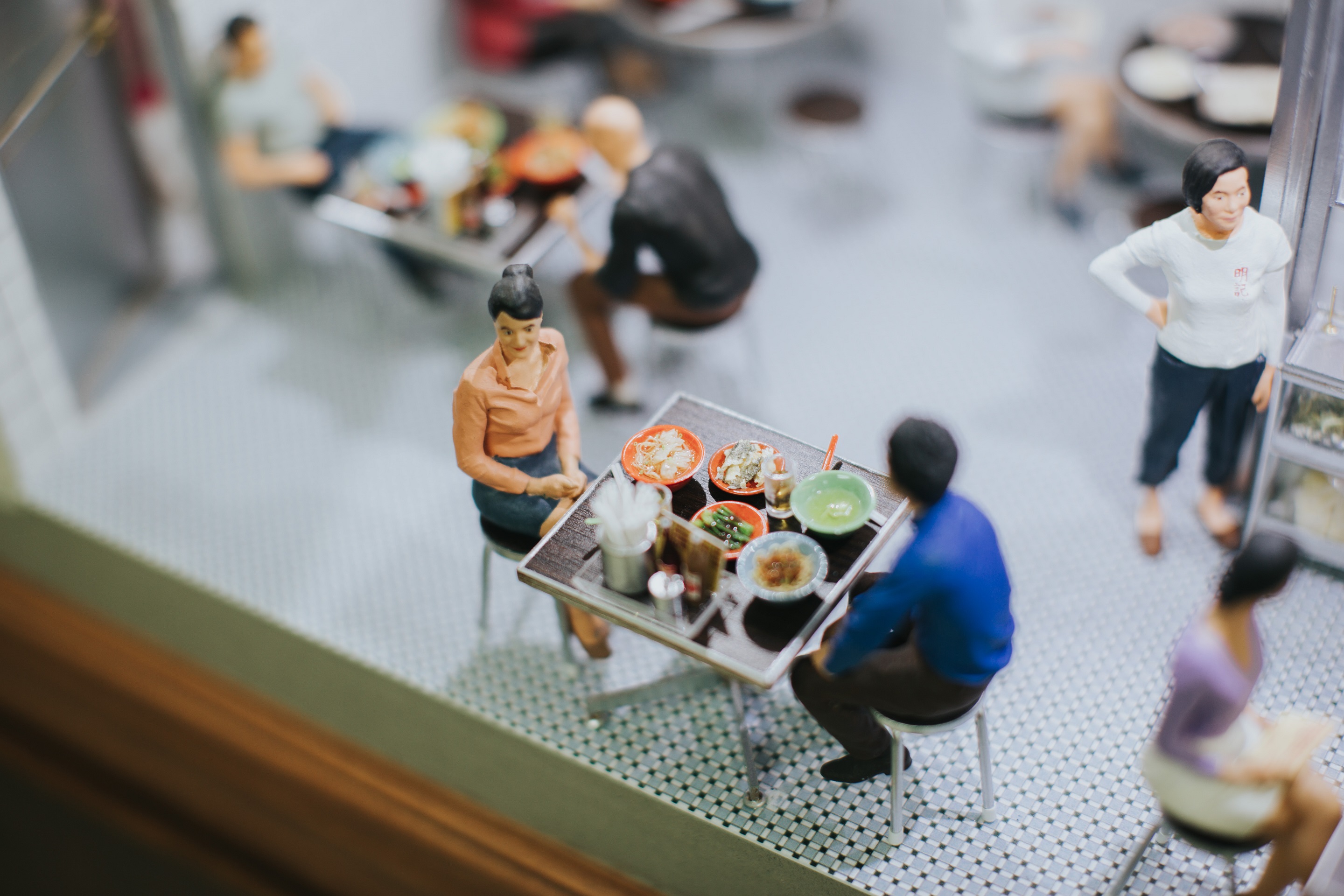 The works were on display in Times Square in Causeway Bay for a month during the 2018 Christmas season.  “I got sentimental.  Many Hong Kongers have come to see the exhibition.  I will always remember that I have done something worthwhile for my home city.”  Maggie said that the day she completed the work she headed straight to bed because she was exhausted.

Tony wants to produce more micro models, perhaps one at a time.  “Hong Kong society offers a great deal of ideas for micro modelling.  Unpreserved sites such as the Haw Par Mansion and the Lai Yuen (Lai Chi Kok Amusement Park) are only some of the examples.” 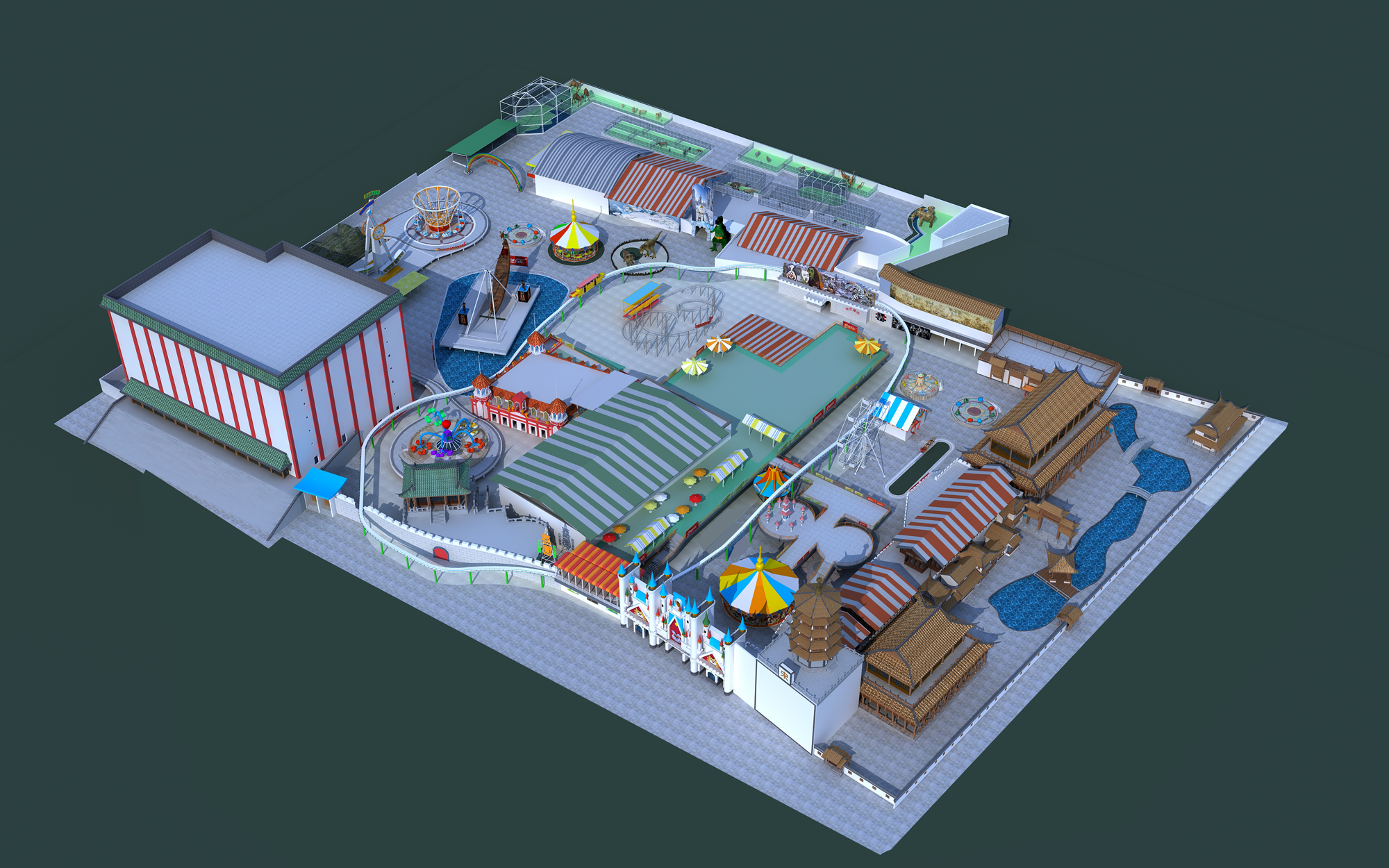 The pair is now recreating Lai Yuen ( from the interviewees )

He revealed that the pair is working on a miniature model of the latter. “Recreating Lai Yuen has long been our dream.  It’s one of the classics of our childhood leaving me good memories. ”

He continues, “For the work of Lai Yuen, we shall recreate the amusement rides. There should be ten including the roller coaster, ferris wheel, octopus and coffee cup. We shall make them move. For the zoo we will make the Tino, that’s the elephant. We will make its head and its nose move.”

“Aside from this, we are also looking for information of old familiar places so as to bring them back to life.”

Agnes Chow : No regrets for our youth
Scroll to top