Leave it or Love it

An unsuccessful first act in life can means time wasted for some.
Rewind, and you will realise that those little subplots in that same first act have in fact formed the very backdrop of your future.
Mime artist Gaffer Tsui Ka-lok is not one whose childhood dream was to promote the art of mime.  It was during his journey of self discovery that he injected this art form into his vein and let it run through his entire system.
He was also once a Hong Kong’s pride in the eye of the local media.  Doesn’t ring a bell?  Come on… 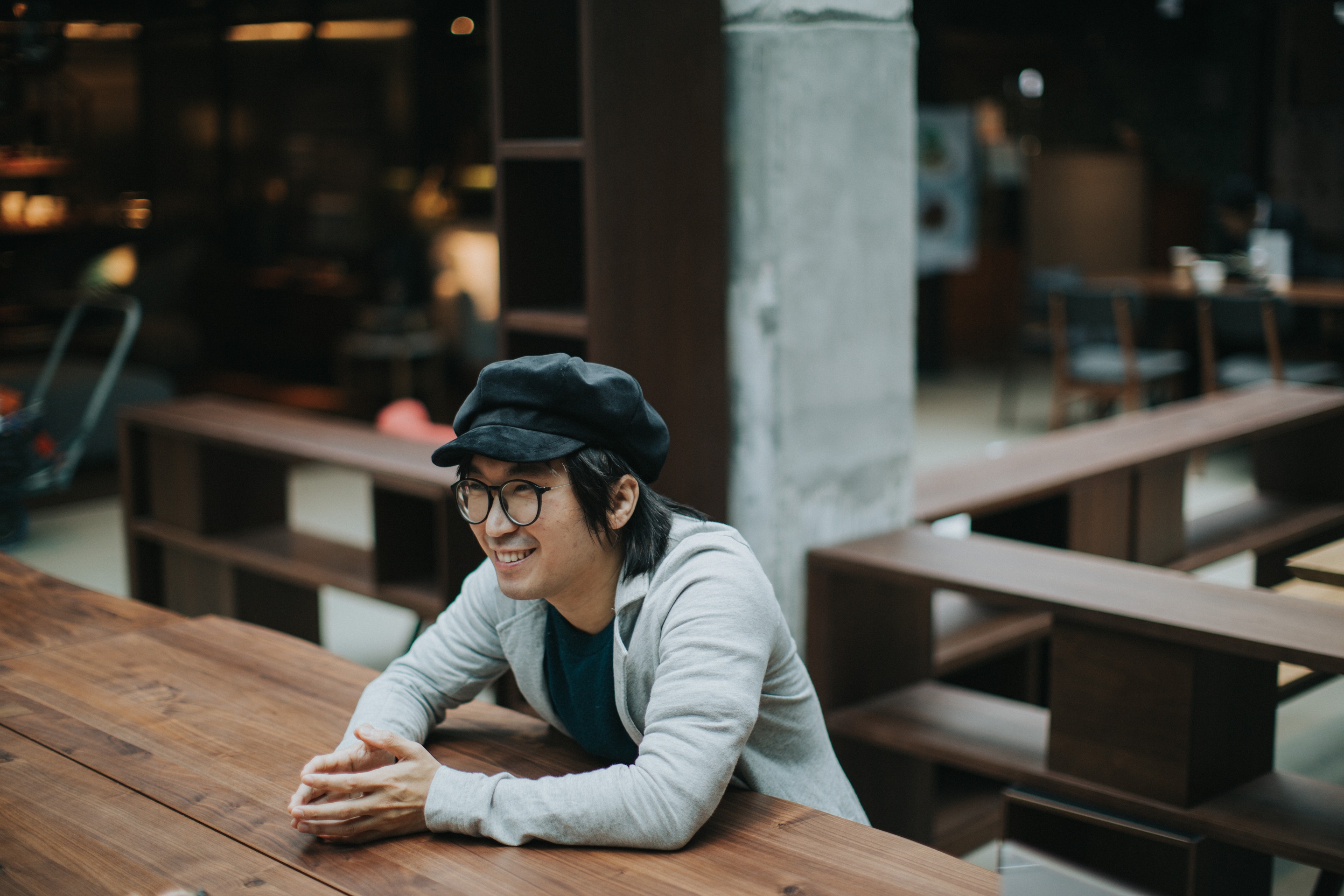 “Mime’s allure lies in its silent bodily expression of emotion
which challenges the audience with context change potential
that ignites imagination. It is a poetic, beautiful notion.”

How Tsui stumbled into theatre acting?  There was not a calling as such but signs reveal themselves on closer inspection of his past.  “I had my first acting experience in a school play when I was a Secondary 3 student.  The teacher thought I fitted the bill.” He played death with a scythe.  “It was not the lead role but a speaking one which won praises from the teacher.”

Acting was not much of a passion for young Tsui.  He was well aware that he was not cut out for school though.  “My first HKCEE attempt ended with two points.  I thought I would give it another go and buried my head in books the year that followed.  Eventually, i got nine points.”

After graduation, he might have become the first Slash generation.  He joined the labour market at the age of 17 juggling multiple jobs at a time (until today).  At his peak, he held three causal jobs.  His resume includes stints at the SPCA Hong Kong and convenience stores, and in industries such as logistics and warehousing.  His longest employment was in wholesaling which lasted three years.

His life as a “Slash” meant that he had time for a Hong Kong Repertory Theatre outreach programme and a short theatre acting course at The Hong Kong Academy for Performing Arts.  He even took juggling lessons with a friend and visited schools to promote and perform juggling.

Then, he took a mime course. 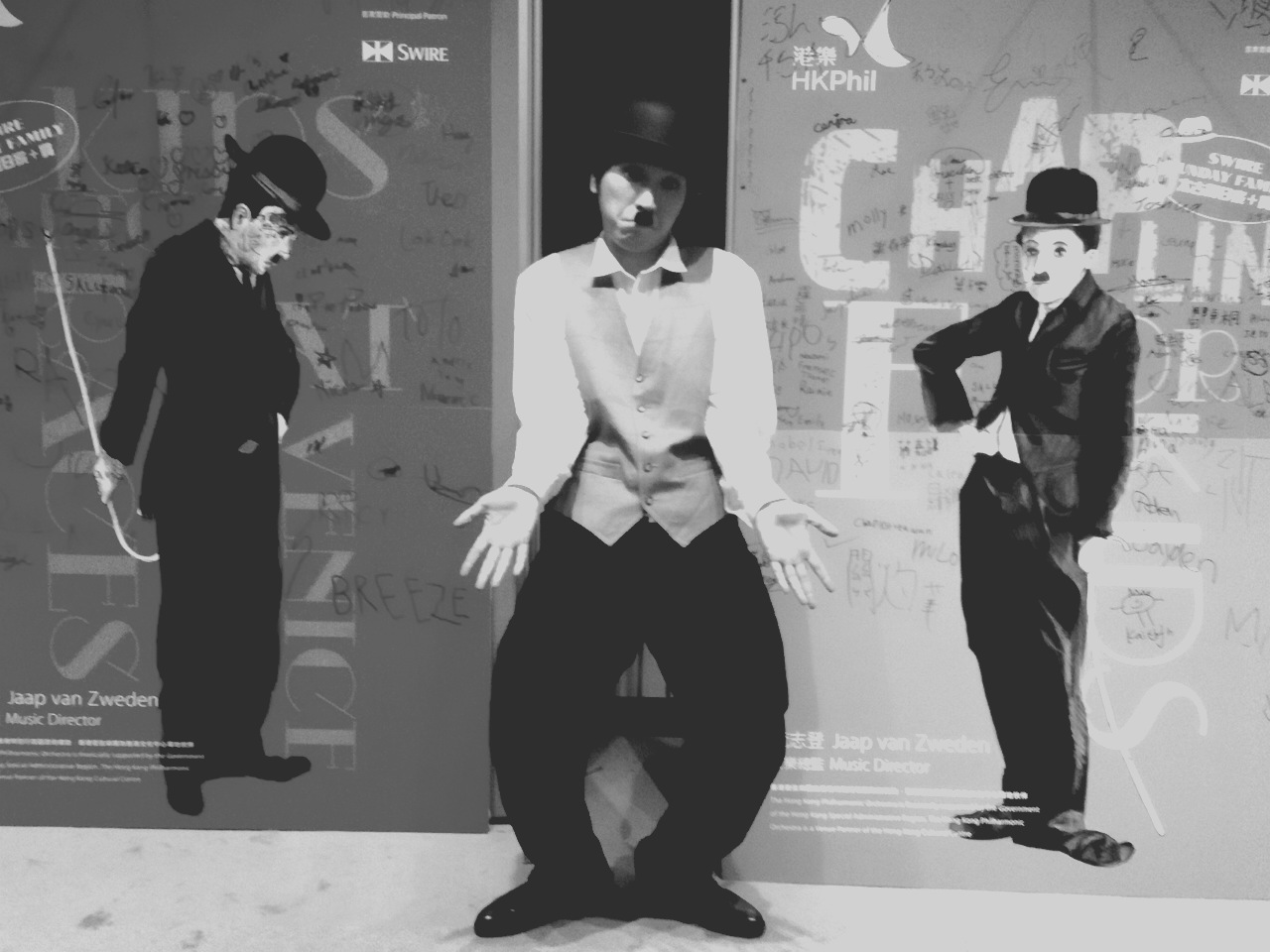 Have you ever had a taste of local mime production? (photo from Tsui)

You would be wrong to expect an A Star Is Born storyline.  No, he did not become an overnight sensation in mime theatre.

“The course instructor emphasised that mime acting has nothing to do with sign language.  Rather, it takes imagination.  You act with your body.  The course did not fuel my mime acting ambition.  I just couldn’t get the hang of it.”

It felt just like his second HKCEE attempt.  “Didn’t do well?  Try again and make the grade.  I thought myself mediocre when I was learning mime acting.  You just have to hang on in there.”

He also signed up with the Fringe Mime & Movement Laboratory, learning the ropes from Danny Suen and Owen Lee.  He did not so much as to think about the future.  “Stage experience was essential.  I longed for more acting opportunities that would allow me to review and reflect on my acting.” 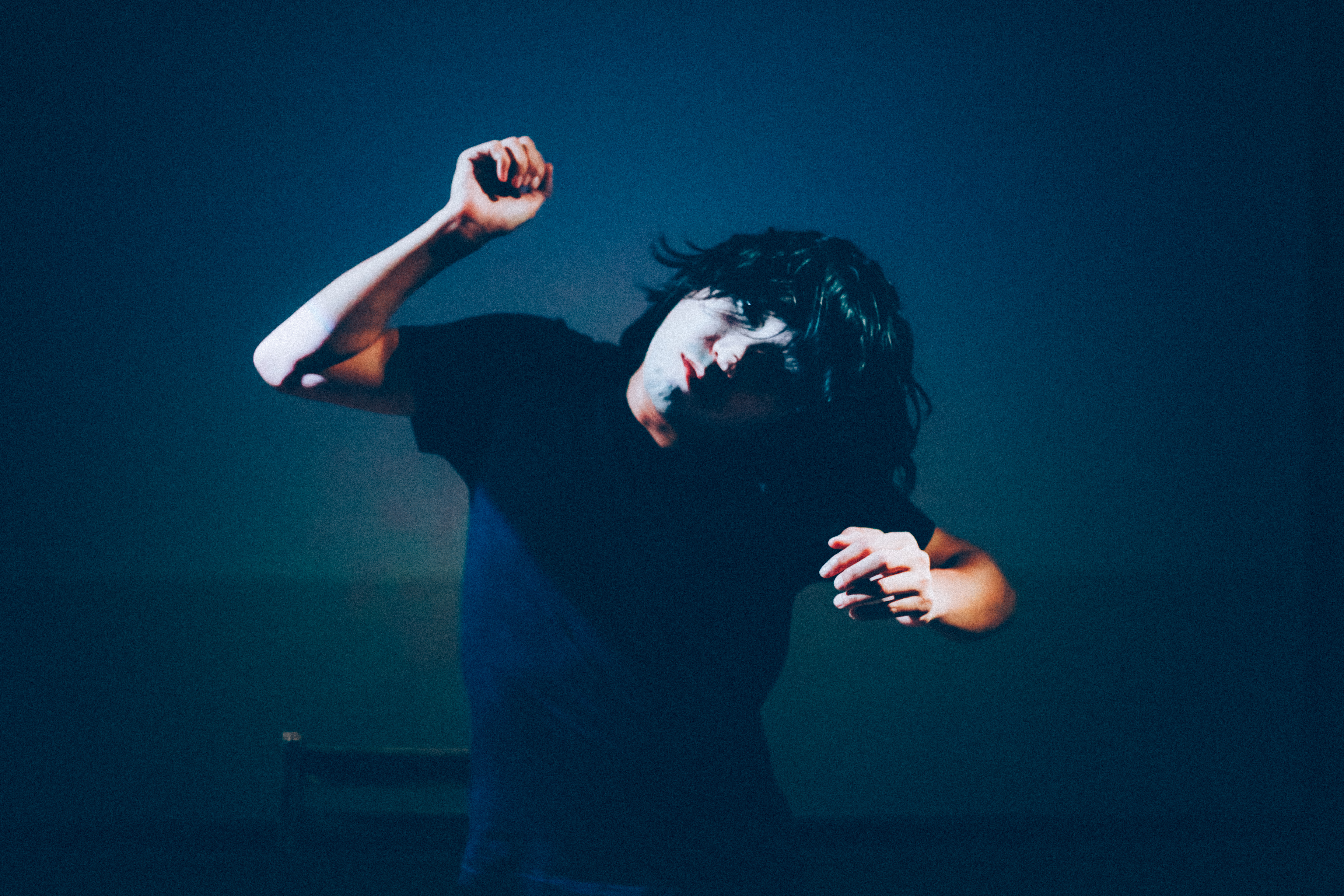 Tsui said mime is more than a sign language

Out of the blue, he said: “Never in my wildest dream I’d imagine mime acting would make me filthy rich.”  However……

In 2007, Tsui made his stage debut in director James Mark’s Hamlet.  He could have probably died happy then.  “I was cast as an extra but the actor who played the general did not show up so James told me to give it a shot.”  Lo and behold, it was the first character in the play to address the audience.  “Having a speaking part in a play at the Hong Kong Cultural Centre Grand Theatre?  How cool was that!”

Reality never promises eternal happiness.  “I do feel blue sometimes.  Earlier in my career, for instance, I had my part cut right before a performance.”. He has had his fair share of disorientation too.   “Things can get you down and make you want to throw in the towel.  After a few days, however, you chill.  If you feel inadequate, push yourself harder and do better.”  Everybody’s got to pay their dues. 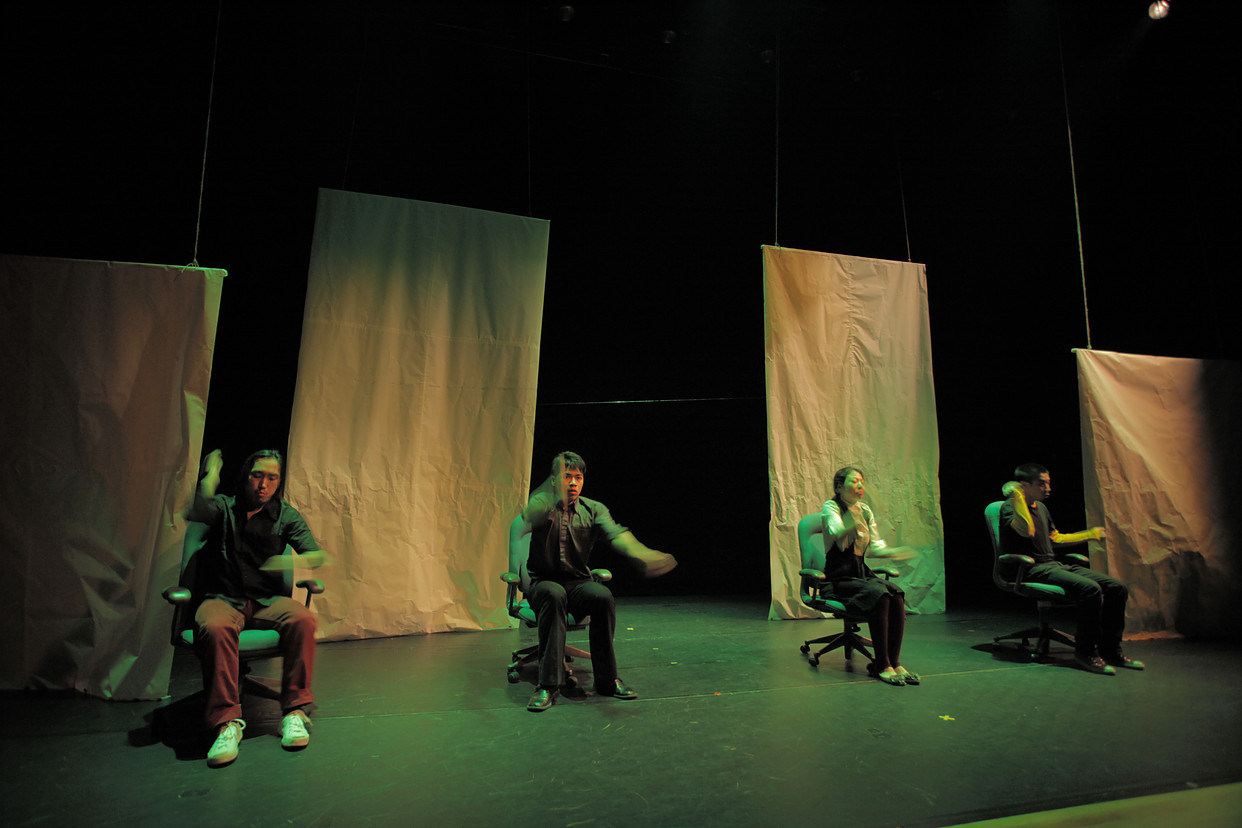 Where am I going (stage photo from Tsui)

The subsequent 10 years shaped who he is today.

As regards work, Tsui and a few friends in 2008 founded a production company with a focus on short commercials.   The one-stop operation had him put on many hats.  He was producing, directing and filming, learning on the job and to his surprise winning awards galore.  “Perhaps my theatre and mime training give me ‘senses’.  The gags we used were quite spot on.”

In 2009, Tsui joined forces with the Fringe Mime & Movement Laboratory and took part in South Korean director Yoon Jong Yeoun’s Why Not.  He also signed up for the Chuncheon International Mime Festival in South Korea and received Yoon’s movement training.  “That was my first overseas experience and it was profound.  After the festival, the director gave us a hug, not a casual one, because I could feel the energy, the encouragement.”

He describes his past as in the mist with no sense of direction.  “That experience allowed me to be better acquainted with my physical being and I started to develop self awareness.”  There were no blood oaths.  Ever since then, however, Tsui has made up his mind: “I shall devote my life to mime.”

So, let’s get to it.  He then formed a mime double act with fellow member of the Fringe Mime And Movement Laboratory Michael to create and promote mime.  Their first work Where Am I Going took their audience on a journey to explore the road ahead.

In 2017, Tsui and Michael created 24hr Restricted Area – a lamentation over social dissatisfaction with a trial run in a San Po Kong dance studio.  “People are pretty hung up about Hong Kong’s current affairs.  Without a theatre or director, we just wanted to get things off our chests.”  The trial run ended after two shows to a very small audience.

Then the mime duo found out on the internet about the 42nd Festival of monodrama and mime in Serbia.  With 24hr Restricted Area under their belts, they enrolled and came out tops among 64 international mime teams, becoming one of the four finalists and subsequently taking home the Best Mime Award.  As Asia’s first ever Best Mime winner, Tsui and Michael quite naturally became a Hong Kong’s pride for a time.

“The award does not make me feel like I was some big shot.  It makes me a more confident mime actor and leads me to think about promoting mime development in Hong Kong.”  The mime duo walks the talk,  continues to create and rolls out experiential workshops especially for children so as to sow the seeds with a view of passing the torch. 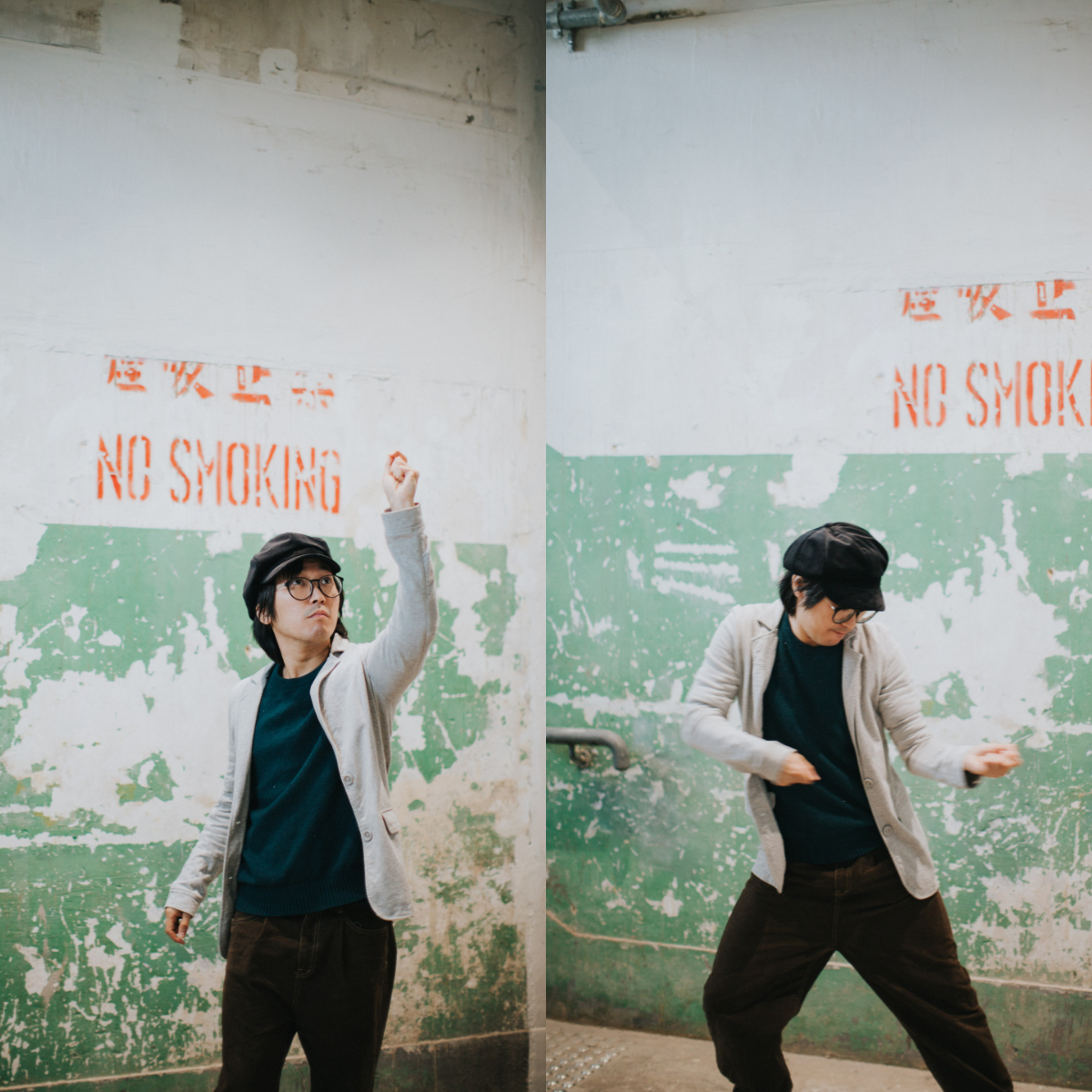 Zero Chan : To brew the city its very own
Scroll to top